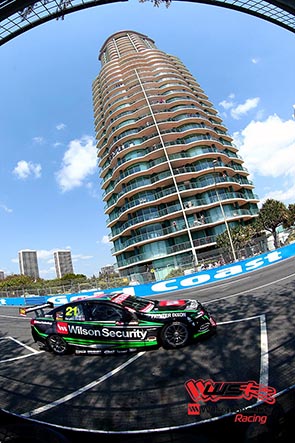 Survival was the name of the game at Surfers Paradise today and Wilson Security Racing got through two spectacular race-start crashes to come home 15th.

It was a great turnaround for David Wall, who was earlier excluded from the qualifying results after contact with Garth Tander.

That meant international co-driver Jamie Campbell-Walter started from dead-last and was right in the line of fire as Ricky Taylor barrel-rolled in front of him.

The restart was not much easier with cars spinning to avoid a stationery Nicolas Minassian so the crew decided to start from pit lane for the final restart of the day.

Wall took over on lap 36 and made steady progress to finish 15th. The pair are now looking forward to a second stab at qualifying, which starts tomorrow at 11.30.

“I’m very happy with our race result. There were plenty of bent cars out there and we are lucky that ours is pretty straight.

“The incident with Tander in qualifying was very regrettable. I looked in my mirror and he was behind me; next thing I know he’s up beside me and it was too late for me to do anything about it.

“We suffered from that damage in the qualifying session but we came back in the race and that’s when it counts.”

“I think some guys were trying to win the race off the start. It’s very dangerous and they need to calm down a bit especially after the first incident with the roll over.

“These cars are pretty tricky to get off the line. Obviously a few cars stalling on the grid caused a concertina effect, which caused havic down the field.

“With everyone being fairly new to the standing starts here at the Surfers Paradise circuit, we’ll probably see some more drama tomorrow as well!”