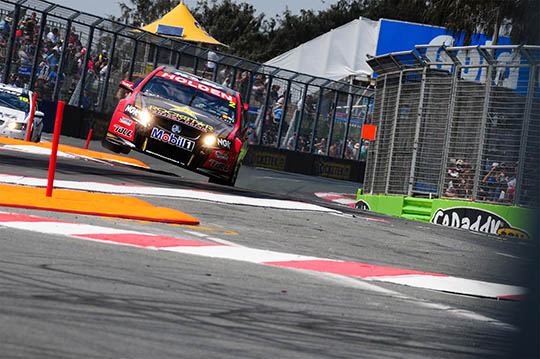 The Holden Racing Team has survived the carnage in a wild, crash-marred first race for the Armor All Gold Coast 600, both HRT Commodores finishing well inside the top 10 – Garth Tander and Ryan Briscoe fourth, James Courtney and Darren Turner seventh.

The race had to be restarted on two occasions due to spectacular start line crashes, Briscoe’s brilliance shining through to dodge a maze of crashing vehicles after starting from 24th on the grid – co-driver Tander having been ‘taken out’ by David Wall early during this morning’s 30-minute qualifying session.

As with Briscoe in the #2 Commodore, international guest co-driver Turner started the race in the #22 car, Courtney having qualified sixth and recording the ninth best time during the Top 10 Shootout.

Both HRT’s internationals performed strongly, handing over to their V8 Supercar main series teammates at the first pit-stop – both Holden Racing Team Commodores were placed inside the top five and looked strong.

After taking over from Turner’s excellent first stint, Courtney brought his Commodore up into second place, however he suffered a rear anti-rollbar blade failure during closing stages of the shortened 79-lap encounter – the 2010 V8 Supercar Champion fighting hard to reach the chequered flag in a very credible seventh position.

On the other side of the HRT garage, Briscoe brought car #2 through the field to briefly lead the race on lap 42 during the shuffle of stops.

When he handed the car over, Tander emerged in a very competitive fifth place and driving with determination, Tander fought to stay in contact with the lead group and ultimately crossed the line fourth – an incredible 20 places better than where they started.