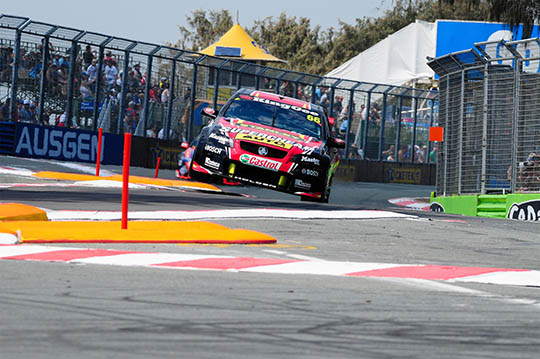 Russell Ingall and Peter Dumbreck have emerged unscathed from a chaotic first leg of the Armor All Gold Coast 600 to bring the Supercheap Auto Racing Commodore home in a strong ninth position.

Ingall qualified 15th and Dumbreck was installed in the car for the start of the race.

As it turned out, Dumbreck completed three standing starts, because the first two attempts at a race start were followed almost immediately by red flags due to a couple of extremely spectacular start-line shunts that eliminated six cars.

Dumbreck’s vast racing experience came to the fore, and on each occasion he deftly dodged the carnage and avoided sustaining any damage to the Supercheap Auto Commodore.

After the third start, Dumbreck slotted into 11th position, which he held for the opening stanza of the race, before moving up to eighth when a few other international drivers made a pit stop during a safety car intervention on lap 16.

The Scottish sportscar driver stayed in the car until a pit stop on lap 37, at which point he handed the car over to Ingall.

The race only ran to 79 of the scheduled 102 laps due to the delays at the start, and Ingall was able to complete the race without any further stops.

Once the pit stop shuffle was complete, Ingall held down seventh position and although he lost a couple of places towards the end of the race with a flat-spotted tyre and a radio communication problem, he still finished a commendable ninth.

According to Ingall, the team’s pre-race briefing included a discussion about the high probability of a start-line incident.

“I said to him, ‘don’t look at the bonnet, look four rows up, because there’s no doubt at all there’s going to be some stalled cars,’ and he dodged and weaved, kept the car straight and did a really good job.

“I flat-spotted a tyre, so ninth was a good result. We seem to always be within the top 10 now.”