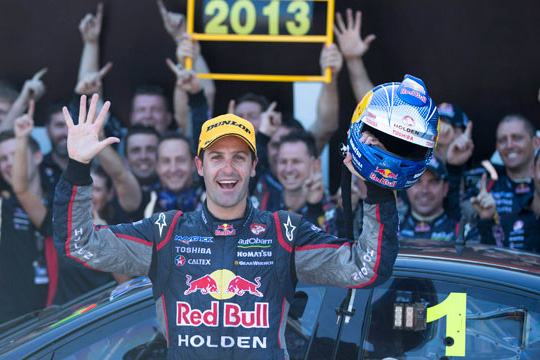 Whincup secured the crown finishing third in the final race of the season at Sydney Olympic Park, won by Shane van Gisbergen.

Victory in Saturday’s Sydney 500 opener gave him a comfortable 110-point lead over teammate and nearest rival Craig Lowndes and he only needed to be among the top 21 finishers to secure the championship. Playing it safe wasn’t in the Whincup’s character and he was involved in some tense moments as he raced hard with Bright, briefly muscling him aside at the final turn as they fought for second position. The Red Bull racer wasn’t able to make the move stick and subsequently dropped back to third, leaving pole sitter Van Gisbergen to sprint away for his fourth win this season and an equal-best fifth place Championship finish.

Lowndes finished in fifth position to secure to tie up a one-two for Triple Eight Race Engineering 128 points behind his team-mate, the third consecutive season as runner-up to Whincup, who becomes the first driver to win a hat-trick of championships since Mark Skaife in 2002.

Earlier, Team Hiflex’s Tony D’Alberto found himself directly in the fence at turn one, collected when Holden Racing Team’s Garth Tander and Jonathon Webb (Team Tekno Darrell Lea) were battling for position off the start.

The window for the first of the two compulsory pit stops opened when the race leader commenced lap six and many cars opted to pit in the following two laps.

Alex Premat was handed a mechanical black flag on lap 21 for loose body work with the rear under tray of his Fujitsu sponsored Commodore flapping in the breeze. The team were able to remove it in the pits and he was sent back out onto the track.

Nick Percat in the Holden Racing Team Commodore was in the pits early on with steering issues and returned to the track on lap sixteen. Teammate Garth Tander suffered mechanical issues on lap 39 and remained in the pits for the duration.

A safety car was bought out onto the track on lap 32 after James Moffat’s Nissan stopped mid-lap. Moffat had previously reported vibrations in his Altima before he ultimately lost drive in the car as he tried to get it back into the pits.

Dean Fiore (Dodo Insurance Racing) was handed a drive through penalty after he was investigated for passing while under yellow flags.

The race restarted on lap 36 and the lapped car of David Wall (Wilson Security Racing) was caught among the front runners and ended up in the fence at turn eight. His car was largely undamaged and continued the race without incident.

Tim Blanchard (Wilson Security Racing) then collided heavily with the rear of Fiore’s car at turn one, spinning the latter into the escape road while Blanchard ran head on at speed into the tyre barriers. The Dodo Insurance driver was able to continue despite the damage to the rear of his car, but the safety car was deployed while Blanchard’s car was removed from the circuit.

Van Gisbergen took the opportunity to pit under safety car and re-entered the track behind Bright, taking advantage of the speed in his VIP Petfoods sponsored machine to pass the Team BOC driver to claim the lead of the race.