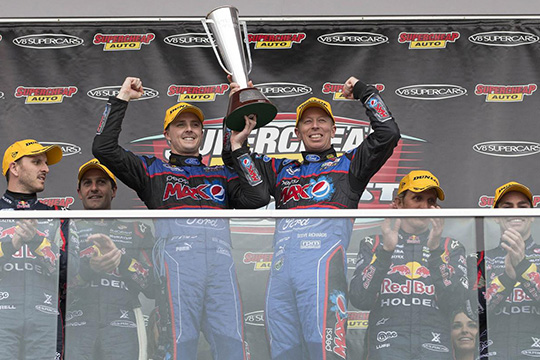 Richards’ signing brings his seven-year relationship with Ford Performance Racing to an end, having raced for the factory Ford team full-time between 2007 and 2010 and as a co-driver for the last three years.

Regarded as one of the category’s strongest co-drivers, Richards partnered Mark Winterbottom to victory in this year’s Supercheap Auto Bathurst 1000, claiming Ford’s first Bathurst 1000 win since 2008 and Ford Performance Racing’s maiden victory on the mountain.

“I’m really looking forward to next year and it’ll be fantastic partnering Craig, one of the strongest endurance drivers in Australian touring car history.”

The signing follows Lowndes’ former endurance co-driver, Warren Luff’s announcement that he won’t be returning to the role in 2014.

Signing the reigning Bathurst 1000 winner is a major coup for Red Bull Racing Australia, and team principal Roland Dane is delighted to have secured Richards’ services.

“He has a wealth of experience that is invaluable during these intense races,” Dane said.

“With three Bathurst 1000 wins under his belt, he’s the perfect driver to partner Craig next year, and his win this season at the Mountain proved that he’s got what it takes to deliver us the best results possible.”

Dumbrell and Whincup combined to win the 2012 Bathurst 1000 and September’s Sandown 500, but after making two critical mistakes during this year’s Bathurst 1000, Dumbrell had questioned his future participation, prompting speculation that he would quit to focus on his growing business interests as CEO of Autobarn.

“To be joining Red Bull Racing Australia and Jamie again next year is fantastic. We’ve had a really good run together and I’m looking forward to trying to continue that,” Dumbrell said.

“I can’t wait to have a stab at winning back our Bathurst crown!”