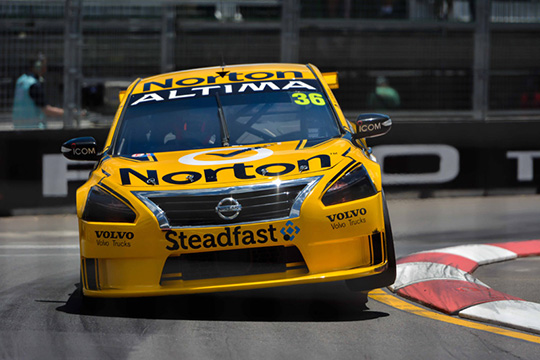 Michael Caruso will remain at Nissan Motorsport after signing a new deal with the official four-car factory V8 Supercars team.

Confirmation of the deal means the four-car Nissan Altima squad line up is locked in with Caruso joining team owners Rick Kelly and Todd Kelly and Winton 360 race winner James Moffat who announced his contract extension with the team back in August.

Caruso, currently sits 24th in the standings after a difficult season, but has recorded five top 10 finishes in his #36 Norton-backed Nissan, including his second place result behind Moffat at Winton in August, this year.

“After what has been a development year for the team, I’m excited about what the future holds with Nissan and Norton.

“We had our highlight result at Winton with the 1-2, and we’ve got a lot of improvements coming for 2014 so I really wanted to be a part of that and it’s great that I can now put all of my focus there.

“Stability is absolutely critical in Nissan’s return to the category, and that’s exactly what we’ll have for next year.

“When you have the same people in the cars and the same group of engineers and mechanics, it’s definitely going to start paying dividends.”


The 2014 season will mark Caruso’s seventh full-time season in V8 Supercars which has seen him take one race win (Hidden Valley, 2009) and five podium finishes.

“He is a genuine elite driver in the V8 Supercar ranks and is deserving of his factory driver status, and is also an outstanding ambassador for our business partners and the sport in general,” Crennan said.

“In a sport where there are so many driver/team deals done as ‘marriages of convenience,’ Michael’s re-signing with us is as a result of a genuine business and sporting criteria evaluation by both parties … These are certainly the deals that endure and sustain best in this sport.”