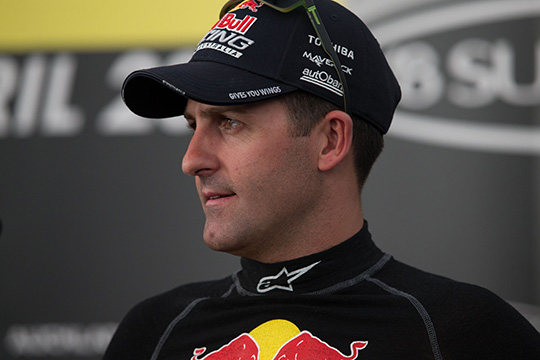 Defending V8 Supercars champion Jamie Whincup has underlined his commitment to Triple Eight Race Engineering with a one-year extension to his contract.

The extension will keep Whincup at the team until at the end of 2015 – the same time as teammate Craig Lowndes’ contract expires and Red Bull’s sponsorship is due for renewal.

“I’m really happy to be staying with the family. There have been some big changes that have happened over my time here – naming rights sponsors, changing to Car of the Future and now changing engineer.

“The category is in really good shape and is moving forward well, so I’m really excited to confirm that I’ll continue to be a part of it for at least another couple of years,” Whincup said.

Whincup has previously signed multi-year arrangements, but earlier cited his preference for a short-term deal was down to “the category changing so dramatically for everyone”, adding “my best is still yet to come, so one year is good.”

Since joining the Brisbane-based outfit in 2005, the 31-year-old has claimed five V8 Supercars Drivers Championships and four Bathurst 1000 wins as well as contributing to five teams Championship titles.

Whincup heads into the 2014 season chasing a record sixth championship with new race engineer David Cauchi who replaces Mark Dutton after he was promoted to Race Team Manager.