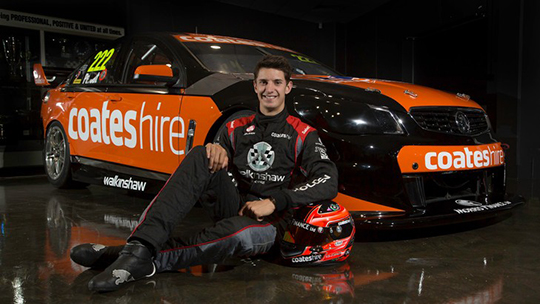 After running an interim livery at the sydney.com Test Day, the #222 Commodore will run in the Coates Hire colour scheme for the Clipsal 500 Adelaide and Formula One Rolex Australian Grand Prix events.

A new livery will be unveiled again at the Tasmania 400, as rotating sponsor Heavy Haulage Australia takes over the title sponsorship until the end of the penultimate round at Phillip Island. The #222 will then return to Coates Hire colours for the Sydney 500 season finale in December.

Coates Hire has backed Percat since 2011 in both the Dunlop Series and the Porsche Carrera Cup Australia and the 25-year old described the livery as an evolution of the colour scheme from his 2011 Dunlop Series car.

“It looks awesome; the Coates Hire orange and the chrome touches certainly make it stand out,” said Percat.

Percat, who famously won the Bathurst 1000 in 2011 at his first attempt co-driving for Garth Tander, made his solo debut last year standing in for the injured James Courtney at the Sydney 500 in December.

The 25-year old makes his debut as a full-time driver at his home circuit in Adelaide this weekend, but is no stranger to the demanding street circuit, having competed in Formula Fords, Aussie Race Cars, the V8 Dunlop Series and last year in the Porsche Carrera Cup where he finished second overall in the championship.

“This is the culmination of many years of hard work and to be driving in the full Championship for Walkinshaw Racing is a dream come true,” said Percat whose affiliation with the Melbourne based team stretches back to 2007.

“I am also thrilled to have Coates Hire continue their long association with me.

“There is no doubt this is the biggest challenge I’ve faced in my career and I can’t wait to get over to Adelaide and onto the track for the first time.

“To make my championship season debut on my home track is also something special. It’s a great track and a wonderful event with an amazing atmosphere.”