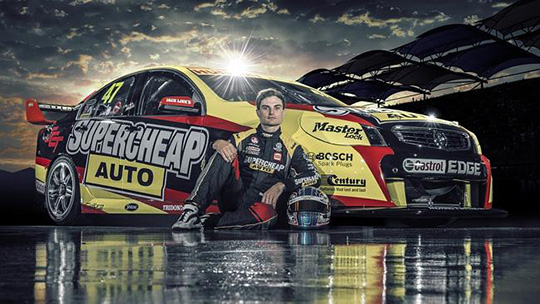 Having joined the Walkinshaw Racing outfit from Erebus Motorsport, it’s a proud homecoming for the Adelaide-born driver, who will again fly the flag for Supercheap Auto Racing after making his debut with the team in 2009.

“I made lots of fantastic relationships with everyone at Supercheap Auto in my first year of V8 Supercars and I’ve remained good friends with everyone, so it’s good to be back as part of the family,” said Slade.

The Supercheap Auto Racing entry ran with an interim livery at the pre-season test day in mid-February, with Slade ending the day 12th fastest, and now the 28-year old believes he has a design to match its performance.

“The car looks spectacular and will stand out on the track. The new look, ‘new’ driver and a ‘new’ team for me mark a fresh new era for the Supercheap Auto Racing team,” Slade said.

“I was very happy with our test day form, and now I have a car that looks fast as well as going fast.

“We’ve got a very competitive package – the Walkinshaw cars showed great speed on street circuits late last year, so we’re heading into the season with confidence.

“This season, I want to be back in the top-five consistently, and win my first V8 race.”

The Clipsal 500 is one of Slade’s favourite V8 Supercars events and he is eagerly anticipating his first laps around the track.

“The Clipsal 500 is a really awesome event,” Slade said.

“As the opening race of the season, it’s just massive. And this year the format is different with the twilight races on Saturday, so I think that there’s going to be plenty of excitement for everyone.”

D’Alberto, whose family-owned team has a long association with Walkinshaw Racing, is looking forward to partnering Slade for the 2014 endurance events.

“Joining Supercheap Auto Racing for the PIRTEK Enduro Cup is a fantastic opportunity, and it gives me a great chance of success at some of the year’s most important races,” D’Alberto said.

“It’s going to be difficult watching this weekend, but knowing I’m co-driving with Tim in a team that will be amongst the most competitive come Bathurst softens the blow.”