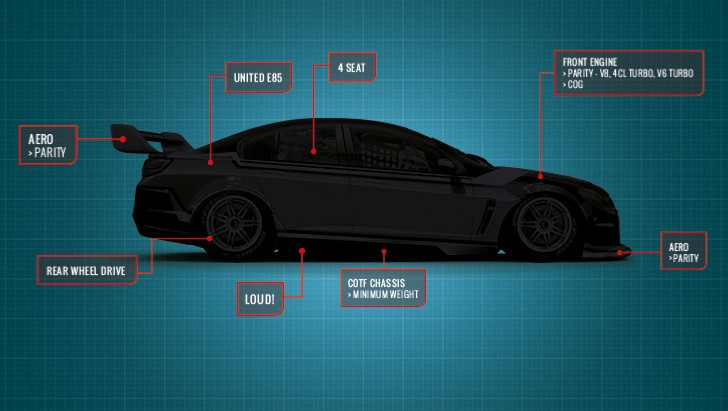 The next generation of V8 Supercars has been revealed with the release of the 2017 regulations.

The long reported rumours that the championship will open itself up to alternate engine and body configurations have been confirmed. From 2017 teams will be able to enter turbo-charged 4 or 6 cylinders alongside the current crop of V8s.

Rules regarding eligible body shapes were further expanded upon in a statement from V8 Supercars.

“The top-line guidelines dictate that the (eligible) car must be publicly available for sale in Australia, is front engine, right hand drive and a full four-seat configuration,” read the statement.

“The race car must be rear wheel drive and accurately reflect the look of the road car, retaining the essential DNA of the sport.

“All cars will use the existing Car of the Future chassis and control components, and be subject to engine and aero parity rules.”

V8 Supercars CEO James Warburton stressed that a main function of the new rules was to entice new manufacturers to the sport while maintaining those already committed.

“It is imperative to keep the sport relevant to the current environment, entertaining and, critically, viable for the race teams,” said Warburton.

“The current climate in world motorsport is absolutely clear. Manufacturers want choice in what they go racing with, otherwise they won’t participate.

“They want their DNA represented and so do we. We will not compromise our DNA – fast, loud and fierce racing.”

The drafting of the exact technical regulations has been handed to two separate teams, one for engine development and one for body configurations.

“The rules will ensure no engine or body configuration has any advantage or disadvantage over another,” declared a V8 Supercars statement.

“The groups will be headed by V8 Supercars’ motorsport department which will be tasked with making recommendations to the V8 Supercars Commission which includes representatives of V8 Supercars, race teams and independents.

“These groups will consult with participating manufacturers and teams throughout the process.

“The technical groups will aim to publish draft engine and body style operating guidelines for discussion by mid-2015.

“These guidelines will be defined towards the end of 2015, allowing testing to commence from February 2016.”

Series veteran and multiple champion Craig Lowndes has shared his support for the new rules.

“It’s going to be exciting – some people are going to have mixed emotions about it, [but] I think that going forward it makes sense,” Lowndes told v8supercars.com.au.

“It will be a very different landscape to what we currently see.

“For us as race drivers it’s great to know where the future is going, what it looks like – but at the same token it’s up to teams and manufacturers to build cars, get organised and obviously the engine plan is going to be the interesting one.”

The current new generation of cars that debuted in 2013 saw Nissan, Mercedes and Volvo join the series which Lowndes sees as a positive for the sport.

“It’s rejuvenated, having Volvo in there, Nissan and Mercedes,” he said.

“It’s exciting, and again going forward with this new evolution car… people want to see good quality racing and at the end of the day, that’s what it’s going to provide.”

Lowndes also acknowledged that some fans may have reservations about such a dramatic shift in the regulations.

“Fans, there will be a couple that aren’t sure about it – but in saying that, a lot of people were in that view when we went to Car of the Future, and look at what has now generated … everyone’s loving the sport.”

The blueprint also includes a change for the branding of the sport to coincide with the media rights agreement between Fox Sports, Ten, Foxtel and News Limited that debuts next year.

The new branding will be slowly integrated in the sport from 2015.