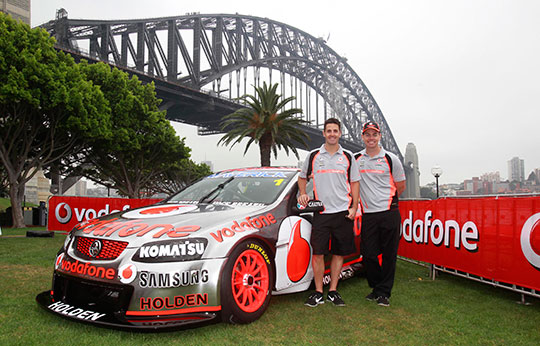 It’s never easy to say good-bye, and this is certainly the case for Vodafone who will be bowing out as the primary sponsor of TeamVodafone; one of the greatest sporting teams of our time, following this weekend’s last race of the 2012 V8 Supercar Championship Series in Sydney.

To mark the end of a fantastic era, four-time V8 Supercar Teams Champions TeamVodafone, today unveiled a striking new livery to pay homage to the successful union Vodafone and Triple Eight Race Engineering have shared over the past six seasons.

Donning a stunning all-chrome livery with rocket-red wheels, the TeamVodafone Commodores will take to the track for one last time this weekend, for the last race of 2012, drawing to a close an impressive era with naming rights partner Vodafone.

In the six years united, TeamVodafone has enjoyed 135 podium finishes, 84 of those race wins. The team also boasts 48 pole positions and a win ratio of 46.15%.

As TeamVodafone, Jamie Whincup and teammate Craig Lowndes have been victorious in four Bathurst 1000 events and have celebrated an incredible 13, 1-2 finishes.

Whincup, who has won four V8 Supercar Driver titles and taken 62 race wins in Vodafone colours, said he hoped to see the partnership out with a final race victory.

“This is a fitting livery to close out the TeamVodafone era,” Whincup said.

“We’ve had huge success working with Vodafone and I personally, really want to say thank you by delivering a win in the final race.”

With the Homebush street circuit the only box not ticked for the champion elect, Whincup is hoping to achieve that goal this weekend.

“To an extent, I feel like I’ve got the pressure off this weekend as far as the championship is concerned. But every time we hit the track we’re always looking to do our best, particularly given this is our last race as TeamVodafone,” Whincup continued.

“So far, a win at this race has eluded me so I will be looking to maintain momentum and go as hard as I can right to the final lap of Sunday’s race.”

Teammate Craig Lowndes, who has won 25 races as a Vodafone ambassador said he would love to close out the season with a win.

“I love the livery, it is very much like the McLaren Formula 1 car,” Lowndes said.

“It will be our last event as TeamVodafone so it is going to be a sad weekend but hopefully we can finish the 2012 season on a high.”

Sitting third and just 63 points shy of Mark Winterbottom, Lowndes will be fighting for second in the championship.

“What a challenge we have in front of us,” Lowndes continued.

“Fighting for second in the championship with two races to go is going to create an amazing battle but I’m determined to bridge the gap.

The final event of the 2012 V8 Supercar Championship Series will get underway on Friday with four practice sessions. Saturday’s on track action will include Qualifying, the Top Ten Shootout and Race 29.

The Sydney 500 will conclude on Sunday with a final Qualifying session and Race 30 in the afternoon. 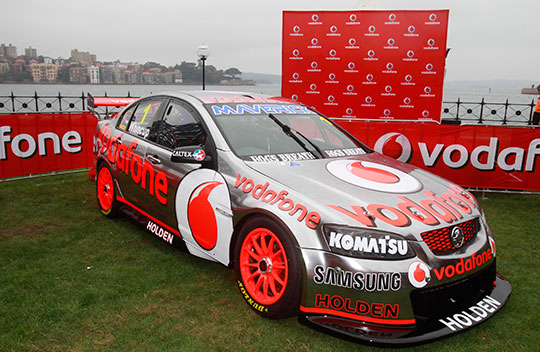