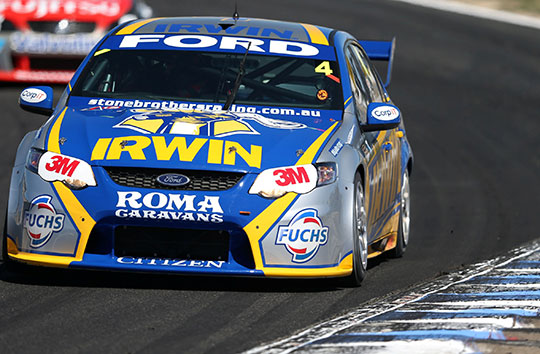 Holdsworth has scored a race win plus three pole positions since the event first debuted in 2009.

The events marks the end of Holdsworth first full season with IRWIN Racing, and it will mark the end of his brief time aboard a Ford with the Stone Brothers Racing squad switching to AMG Mercedes along with new partners Erebus Motorsport in 2013.

The twin 250km race format is regarded as one of the toughest challenges in the sport. That is set to be even tougher in 2012 with temperatures expected to be in the high 30s putting plenty of focus on driver fitness.

Holdsworth sits eighth in the championship standings and is coming off strong qualifying and race performances in Abu Dhabi and more recently at Winton Motor Raceway where he scored his first podium result aboard the IRWIN Racing Falcon.

In its short history the Sydney Telstra 500 has provided plenty of drama and Holdsworth is keen to break the Triple Eight Race Engineering and Ford Performance Racing stranglehold of race wins in the season’s final two races.

“I love the street circuits and especially this one as I have had such good success there with three pole positions and a race win,” said Holdsworth.

“We want to get our best results now and aim for podiums in Sydney and a race win would be ideal heading into the off-season. Obviously this time around I’m in the IRWIN Ford for the first time and I need to be on top of what will make this car work on the Homebush streets. The last few events have shown that we are on top of the set-up, our qualifying performances have really stepped-up and a podium at the recent race at Winton showed we have the race pace.

“Sydney will mark the end of the exclusive Ford versus Holden rivalry and it’s been awesome to have driven in this period. There’s plenty of passion from the fans for the category and 2013 will be an exciting time for the sport. It’s especially exciting for us moving to a new manufacturer making it a four horse race. The level of competition should be close which is great for us as drivers and teams, plus the punters having the opportunity to support their favourite brands fighting each other.”

What race engineer Brad Wischusen had to say:

“It’s not only a street race, but it’s also one of the longer races we do throughout the year,” said Wischusen.

“The circuit has a lot of kerbs and it’s about getting over them, keeping the balance in the car, plus making sure the pit strategy is right for you to move up the order. We have seen cars run out of fuel at this race in the past, so it’s a tough for all concerned in terms of getting it spot-on come the run to the chequered flag. This year especially seems to have seen fuel strategy play an even greater role in the racing and the results. Safety Cars can force you into a strategy where you have to stretch the fuel windows and with Sydney being a street track I wouldn’t be surprised to see if this comes into play once again.

“It’s handy having a driver that’s confident in the track and especially the car. It means that you go into an event confident that you can end the season on the right note.”