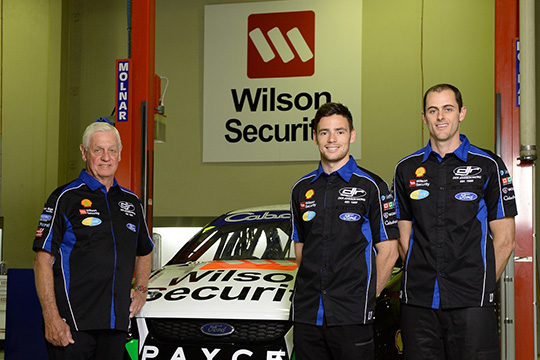 Following the team’s recent purchase of the Paul Morris Racing Entitlements Contract and the signing of Scott Pye, Wall will replace Tim Blanchard in the team which will officially be referred to as Wilson Security Racing from 2014.

After two seasons with Brad Jones Racing, Wall was selected over a number of candidates with the team claiming the new pairing will “take the iconic Queensland based team back to a dominant position in V8 Supercars competition”.

Wilson Security has increased its commitment to Dick Johnson Racing with a new long-term deal which sees it assume full team naming rights coupled with primary naming rights sponsorship over both of the teams’ entries. The team will become “Wilson Security Racing” from January 1st 2014. Payce Consolidated will also join the team as a major sponsor across both team entries.

“The events of the last few weeks have been exactly what Steve (Brabeck), Ryan (Story) and I have been striving for,” said team owner Dick Johnson.

“John [McMellan, Wilson Security CEO] has been a fantastic sponsor for DJR this year and I believe we have rewarded his early season vision to get involved with us.

“Payce also has a long association with motorsport and we welcome Brian Boyd as a key partner in the coming season’s racing.

“On the driver front we have two very talented young guys. I have said from the outset of 2013 that this is where our future lies and Chaz and Tim proved that this year.

“We have watched David Wall, as we do all the young guys, and I have been impressed with how he keeps qualifying in very strong positions. It may well be the hardest part of today’s Championship so I am confident that with Campbell and our guys we can bring on his race results to match. He will be a good fit and he is a nice guy, just like his dad Des.” Johnson added.

On the announcement of the new DJR line up David Wall added “I have now had two seasons with BJR with a small and very dedicated crew but I now need to take the next step and there could be no better opportunity for me than joining a two car team at DJR. I acknowledge the expectation for me to take the next step in my overall performance as part of it. I feel genuinely privileged to have such an opportunity.”

The Wilson Security Racing Team will launch its new colours and driver line up at the official V8 Supercars test day at Sydney Motorsport Park on 15 February.