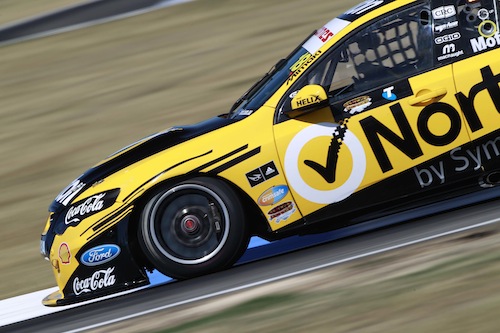 An unusually warm Winton Motor Raceway greeted the team as they rolled out for qualifying this afternoon. The 20 minute session proved fruitful for Moffat with a 5th place start position for Race 27 of the 2012 International V8 Supercars Championship.

Steve Owen and the V.I.P. Petfoods Falcon was the next on the grid in 13th, followed by Fiore in 25th. Steve Johnson was the unfortunate victim of slow traffic which resulted in his final flying lap, which would have led to a top 10 place, not being completed and forced him to the back of the pack in 27th.

A feisty start to the race caused a safety car to be called before the first lap was completed. Several of the top running cars used the opportunity to return to the pits to swap their initial hard tyre choice for the Dunlop Sprit (soft) tyre. The Dick Johnson Racing squad all opted for the soft tyre compound off the start and remained on the track.

When the safety car returned to pit lane, Moffat moved easily past Holdsworth and then went through a short battle with Championship leader, Whincup, before taking the #1 car at turn 3 on lap 4.

Moffat led the race until the first round of pit stops began, he had put 12 seconds between himself and second position. Once all stops were completed and Moffat held the lead. Whincup used his stop to swapped to soft tyres and retuned to the field behind Moffat.

The gap between them was nearly 10 seconds with 20 laps to go. Despite a hard, focused drive by James, the cars on soft tyres around him pushed through, and he bought is Team Norton DJR Falcon home in a personal and team season best 5th position. A great drive by Moffat and the crew.

A consistent but quiet race by Johnson and Fiore, which saw both of the Jim Beam drivers make up places from their start positions. Johnson was the most impressive with an 11 place charge, ending the race in 16th. Fiore moved up 6 places to 19th place.

The team head back out onto the Winton circuit tomorrow afternoon for qualifying and Race 28.