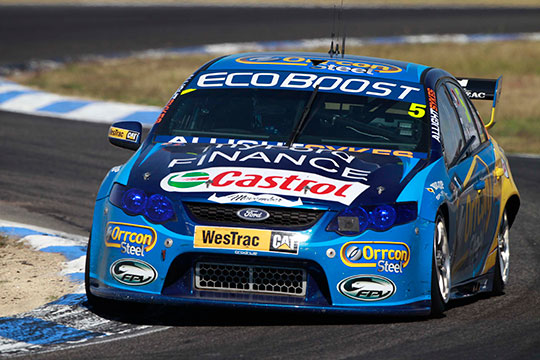 Ford Performance Racing has endured a heartbreaking end to a wild race at Winton with Mark Winterbottom cruelly denied a podium finish after running out of fuel as he crossed the finish line.

The pole-sitter attempted to make the most of his alternate strategy as the team chose to try and gain points in the title race. Winterbottom stopped on the opening lap under a safety car and switched to soft tyres though a multi-car melee not long after the restart forced him off the track which hindered his progress. From there on his pace was consistent and after the final stop he was in contention for the podium, though an overly-aggressive fuel strategy meant he had to make fuel savings near the end of the race. Despite saving a remarkable amount of fuel and holding off Lee Holdsworth throughout the closing stages he ran out just short of the line, missing the podium by 0.03s.

David Reynolds finished 11th after using the hard tyre for more than half the race. Despite dropping down the field early he knew his later switch to softs would ensure he had much better late-race pace. He moved from 20th to just outside the top 10 though had he not been an innocent victim in a number of early race incidents his overall position might have been much higher.

Will Davison made up for a poor qualifying by vaulting from 16th to eighth on lap one. However, his progress was short-lived as on lap 10 Shane van Gisbergen punted him into another car – the same incident which delayed Winterbottom. The impact broke his steering and put him out of the race.

In qualifying Winterbottom claimed his second Winton pole in as many races to extend the team’s streak to four. He jumped to the top of the timesheets near the middle of the session before confirming his pole with a better lap after the flag fell.

Reynolds was satisfied with 10th while Davison was one of the drivers caught out by the traffic and could only manage 16th in the hectic end to the session.

DRIVERS’ VIEW
Mark Winterbottom – #5 Orrcon Steel FPR Ford
Qualifying: 1st – 1m23.14s
Race Result: 4th – Fastest lap: 1m24.73s
“We had a very good car throughout the race and our qualifying pace was fantastic. We went out of sequence at the start to get the soft tyre on and give us a pace advantage. It did put us in the pack but with the car speed we had it could’ve worked if a few things went our way. We were tight on fuel for the last stint which meant we had to manage it for the final 15 laps. It is so hard to race the cars around you when saving but we were actually catching Lowndes and conserving which was promising. I thought I was on for a podium but the car coughed as I came up to the line so to miss it by such a fine margin is cruel. The good thing is we come again tomorrow and with a great car we should be confident.”

Will Davison – #6 Tradingpost FPR Ford
Qualifying: 16th – 1m23.73s
Race Result: DNF – Fastest lap: 1m24.67s
“It was a frustrating day. I had a great start which was perfect and just set me up. After the restart I was not very happy with how the car was handling but it was irrelevant as I got hit by (Shane) van Gisbergen and that pushed me into the Kelly Racing car [Tim Blanchard] and broke my steering so that was me done. We saw what Craig (Lowndes) did starting next to me and Frosty had pace so if I wasn’t taken out it would’ve been a very different result.”

David Reynolds – #55 The Bottle-O FPR Ford
Qualifying: 10th – 1m23.61s
Race Result: 11th – Fastest lap: 1m25.02s
“Things didn’t really go according to plan. The strategy had me running on softs late in the race with the aim of passing a lot of people. I did that, I passed a lot of cars but I got turned around early and lost a bunch of time when on the hard tyre so it could’ve played out better. The first safety car hampered our strategy but if I can qualify better tomorrow we will be okay.”

Tim Edwards – FPR Team Principal
“Today was a tough one for all of us though I must commend Frosty on his drive given how aggressive we were with our fuel. He did a remarkable job. He had the pace to be in the fight for the win so we are disappointed. We know we have great car pace and tyre life which gives us confidence. Dave and Will didn’t have the outcomes they wanted but we have a longer race tomorrow and a good chance to redeem ourselves.”