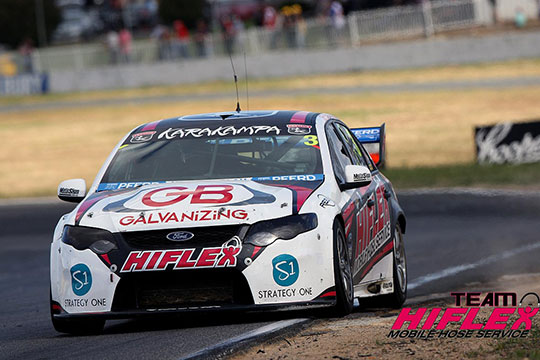 The #3 Ford driver qualified a terrific 12th for Saturday’s race and avoided most of the carnage to take 10th place.

In Sunday’s race, his fortunes changed. He qualified a disappointing 26th, only to be involved in a number of incidents at the back of the field, including a controversial clash with Frenchman Alexandre Premat. He eventually recovered to take 23rd in the race.

While Sunday’s result took the shine off the weekend’s achievements, it was an encouraging display from the Victorian team, punching above its weight and mixing it with the bigger factory teams.

As another gruelling season of V8 racing comes to a close, the final event on the V8 Supercars Championship calendar will be held at the Sydney Olympic Park precinct for the Sydney Telstra 500.

“The car was good on Saturday. We qualified at the right end, raced with the good drivers and fought our way into a top 10 result,” said Tony D’Alberto.

“I was pleased with the car speed. We weren’t going to be a threat to the podium, but we had genuine speed and felt really strong.

“Sunday was just a disappointment, and it was a shame to end the weekend that way. The tyre life was ordinary. We got turned around by Premat, I almost t-boned Stevie Johnson when he was coming back onto the track and had to avoid him. It was just a really difficult race.

“I don’t know why we weren’t on the pace. To be honest, we didn’t change a lot with the car. We were happy with the speed and were confident that we’d be up there again. I don’t really understand what happened.”

“We couldn’t have been happier with our 10th place result on Saturday,” Al D’Alberto said.

“While others were out there struggling with tyres and crashing into each other, we remained cool and calm and brought home a result that the whole team can be proud of.

“Sunday’s race was hard. We didn’t qualify well and that made us vulnerable in the mid-pack. Tony did well to avoid most of it, but somehow, trouble found him at times.”