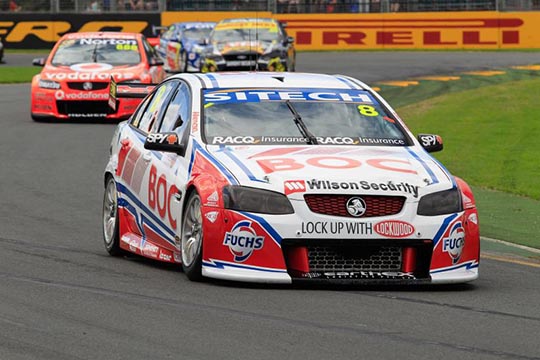 Disregarding the stewards requirement to leave racing room is going to get James Moffat into trouble according to Team BOCs Jason Bright.

Bright, who was driven off the road by Moffat during todays race at Winton, says what goes around comes around in V8 Supercars and Moffat should take that into consideration.

The incident was particularly disappointing after Bright qualified third for the 100km race, which he won last year. He managed to restart after being spun around by James Courtney trying to re-join the track. He eventually finished 20th.

Jason Bright
Team BOC
“Ive qualified third probably three times this year and second once so its one of my best performances. Were running the same set-up here as we did last year and the strange thing is we expected it to be strong in the race and weak in qualifying but it turned out the other way round.

“In the race we had a clutch problem off the start line. It grabbed, which meant that I missed the jump. Then at Turn One I left Moffat enough room but at Turn Two he just drove me off the track; basically drove me four wheels onto the dirt. Our officials keep telling us we need to leave racing room and heres just another example where he doesnt. What goes around comes around. Theres going to be a lot of people paying him back throughout his career if he keeps that up; its very short sighted.