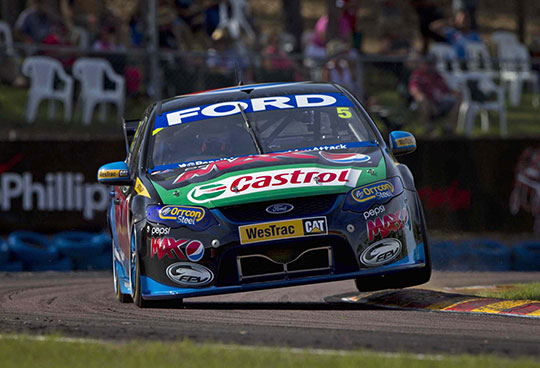 The V8 Supercars Commission has sanctioned a 10kg increase to its minimum weight regulation, with all cars weighing in at 1410kg from the Coates Hire Ipswich 360 event onwards.

The new measure was introduced as a cost saving measure after weight emerged as a parity and technical issue.

Several teams including Ford Performance Racing and Erebus Motorsport V8 have struggled to build their new Car of the Future-spec racers to the previous 1400kg limit, while others have managed to undercut the weight limit, gaining a ballasting and potential performance advantage.

The rule change is expected to help Ford Performance Racing and Dick Johnson Racing given the Ford Falcon is the only entry not running lighter aluminium panels, something only allowed if the production version has this feature.

“In terms of what it would have cost the teams who were over-weight to come back to the minimum weight – and they could have – it would have been thousands and thousands of dollars,” Damien White, V8 Supercars general manager for motorsport, explained to v8supercars.com.au.

The revised rule to the V8 Supercars minimum weight continues to specify a 750kg of weight on the front axle and a minimum combined driver and seat weight of 100kg.

A move to rise the driver/seat minimum weight to 105kg to absorb half the 10kg increase was rejected (the mandated seat weight is 13.8kg).

White acknowledged the change will benefit teams with a heavier driver, but explained all entries must first comply to the same minimum weight.

“Basically this rule does help the teams with the heavier driver, but while that came into it the debate at the end of the day there, was a bunch of cars that were over the weight limit built to the specification that was given to them.

“The fact of the driver weight being altered should be for a separate debate,” said White.