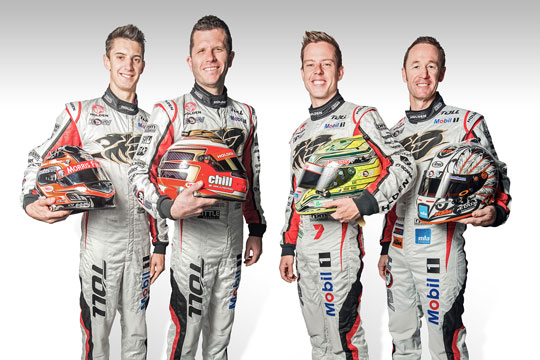 The Holden Racing Team has finalised its V8 Supercars Endurance Cup driver pairings with former Bathurst winner Nick Percat recalled to the squad for the 2013 events.

Percat, previously signed to co-drive alongside Tony D’Alberto at Walkinshaw customer team Tony D’Alberto Racing, has been brought back into the HRT fold in the best interest of team balance and will reunite with 2011 Bathurst-winning teammate Garth Tander for a third consecutive season.

After crashing out of last year’s Bathurst 1000, Percat looked to be out of contention at the factory Holden team, but Tander is delighted to be joining up with Percat again and has every confidence in the 24-year-old.

“It’s fantastic to have Nick back; we’ve shared the car the past two years, obviously with a lot of success in 2011,” Tander said.

“We don’t have to change anything in the car, we know each others likes and dislikes, so it’s just a matter of going to the enduros and doing our best.”

“Bathurst is a fantastic race when you win – it’s the highest of highs. It also creates the lowest of lows when it doesn’t go well.

Percat, currently plying his trade in the Porsche Carrera Cup, is thrilled to have landed another crack at the mountain with HRT.

“I’ve been involved with HRT since 2007 and continuing to drive with them at the endurance races is a dream come true – it really is a second family here for me,” Percat said.

‘Last year was a learning experience. There was just as much attention for making a mistake than what there was for winning the year before.

“I’ve learnt a lot from that so I can’t wait to get back to the mountain and fix what happened – we’re going to put our best foot forward to make sure car #2 is on the top step at the end of the day.”

Tony D’Alberto had been looking forward to having Percat line up up alongside him in the #Team HIFLEX Commodore, but as a loyal customer of the Walkinshaw Racing team, Tony D’Alberto Racing felt that it was the right decision to let Percat fulfill his driving duties with the factory team.

I’m really looking forward to the endurances races, and this news isn’t deterring me from the job that our team has at hand this year,” said Tony D’Alberto.

“Besides the obvious height difference between us, Nick was a great fit for us and he would have been a great co-driver, but we understand Walkinshaw Racing’s need for the switch, so we are now focusing on securing a new driver that can help us achieve the results that we want.”

A replacement for Percat is expected to be announced in the coming weeks.

After closing the door on his 15-season V8 Supercars career, Murphy currently leads the BNT New Zealand V8 SuperTourers Championship and Courtney believes having Murphy alongside him in the #22 car will give him his best shot to date of Bathurst success.

“I’ve been to Bathurst with champions like Jim Richards, Glenn Seton and Cam McConville, and now I get my best chance to date with Murph; he really lifts to another level at the mountain,” Courtney said.

“I’m the only one of HRT’s four drivers that hasn’t won Bathurst yet. I’ve been close a few times but haven’t stood on the top step, so it would be great to do it this year with Murph.

“I said I would get the car into the Top 10 Shootout in qualifying and then hand it over to Murph to do another ‘Lap of the Gods’ – it would set the scene for a great race.”

Across both cars, HRT’s combination boasts a combined total of eight Bathurst wins and four victories in the traditional 500km Bathurst warm-up at Sandown. That, Murphy says makes for a formidable enduro line-up.

“Winning Bathurst is the epitome of what we’re all here for. Things have changed in the championship but Bathurst has retained its place as the absolute pinnacle of racing in Australia,” Murphy said.

“Our pairings couldn’t be any better. Garth and Nick have already had great success at Bathurst and they go together well. It’s the same with James and myself.

“There’s no compromise in either combination and if you look at all the pairings in pit lane, no one’s got a better deal than what we’ve got.”

“Garth and Nick have won Bathurst together before, while James has scored three podium finishes in the biggest race of the year, and Greg’s record at Mount Panorama is undisputable,” added Holden Racing Team Managing Director, Steve Hallam.

“We thank Tony D’Alberto Racing for their co-operation and understanding with Nick which has enabled us to present two very strong driver combinations.

“The Holden Racing Team heads to the enduros with two cars genuinely capable of outright victory.”