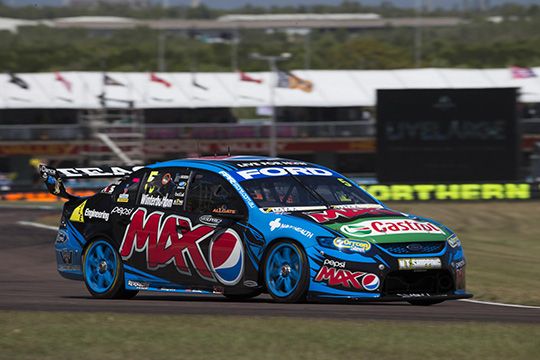 Mark Winterbottom has overcome a poor qualifying result and survived a strategy-driven race to win the SKYCITY Triple Crown finale in Darwin.

Starting on the favourable soft compound tyres, Winterbottom came from 10th on the grid to lead the race in the opening stint.

Remaining on used soft tyres in the final stint, Winterbottom was hunted down by a charging Shane Van Gisbergen as the Pepsi Max Ford tyres faded. Running the more conventional hard-soft-soft tyre option, van Gisbergen had the pace over Winterbottom after overtaking Whincup with six laps remaining and quickly closed down the gap on the Ford. The series leader just managed to hold off the Kiwi, surviving a last corner lunge to take the chequered flag by a mere half a second.

FPR dominated the early stages of the race after starting on soft tyres, with David Reynolds, Chaz Mostert and Winterbottom running first, second and third for much of the race.

Red Bull Racing ran an alternate tyre strategy to FPR and chose to start on the hard compound in the hope of chasing the leaders down on soft tyres in the later stages. It looked like they had made the right choice after the safety car was deployed for a Robert Dahlgren spin when his Valvoline Racing GRM Volvo throttle jammed open on the run to turn five.

FPR survived the shake up during the safety car period and continued to hold the top three positions until Mostert was swallowed by the field and ended up settling for 15th position. David Reynolds showed good pace early on but could not keep up with Winterbottom. Reynolds finished just shy of the podium in fourth.

Norton Hornets’ James Moffat made up for his disappointment in Saturday’s second race by being the highest placed Nissan in seventh. Moffat was the field’s biggest mover, making up 15 places after starting in 22nd.

Scott McLaughlin improved on his disappointing qualifying with an eighth place finish after making up five spots throughout the race. McLaughlin was the only Volvo to finish following team-mate Dahlgren’s retirement.

Jack Daniel’s Racing’s Rick Kelly’s decision to reuse tyres on the Nissan Altima in the Saturday races allowed him to gain 11 positions and finish inside the top ten in ninth. Russell Ingall, however, was not so successful with the same strategy on the Repair Management Australia Holden and ended up dropping a place to round out the top ten.

Lowndes’ title hopes suffered after contact with Mostert damaged his left front tyre forcing him to make an extra stop. Coulthard also struggled and dropped to fourth in the championship after a mistake in Lockwood Racing’s strategy resulted in a 22nd place finish. His team-mate Jason Bright could not salvage the race for Brad Jones Racing either after a pit lane penalty for spinning his wheels during a pit stop left him in 20th.

Tim Slade was also in trouble with the stewards after mixing hard and soft compound tyres on his Super Cheap Auto Commodore. A pit lane penalty meant he had to settle for 19th.

Todd Kelly was the only other non-finisher after getting tangled in an incident between David Wall and Lee Holdsworth. Wall’s Falcon spun and made contact with the right rear of Kelly’s Nissan, collapsing the rear suspension.

Winterbottom will lead the championship over Lowndes by 165 points into the next round in Townsville on 4-6 of July.