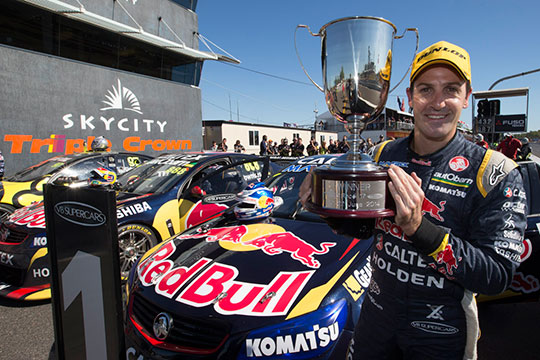 Jamie Whincup has rekindled his title defence with a second race victory on Saturday in the SKYCITY Triple Crown at Darwin’s Hidden Valley Raceway.

Starting from pole, Whincup was forced to fend off Lowndes, before pulling away to finish over three seconds clear of Lowndes at the flag and closing the gap on Winterbottom to 165 points, while Lowndes sits just 65 points back in second after his two second places.

“You’ve got to have a quick car to move up in the Championship and we had that today – we came up with a perfect day two wins and two poles,” Whincup said.

Having started in fourth, Winterbottom’s Ford Pepsi Max Crew Falcon was swallowed up at the start, dropping him to eighth over the opening corners. It was a costly day for the title leader, but fighting back to sixth, Winterbottom minimised the points loss to the Red Bull pair.

Holden Racing Team’s James Courtney had been on course for a top five finish, but an early spin off in the early stages from fifth saw him lose several spots to 11th.

After seeing his Erebus Motorsport team-mate retire from the opening race with power steering issues, Lee Holdsworth was plagued with the same issue and forced to withdraw.

It wasn’t a good day for Norton Hornets’ James Moffat either after a flat tyre and steering damage to the left front of his Altima on the opening lap corners also cut short his race.