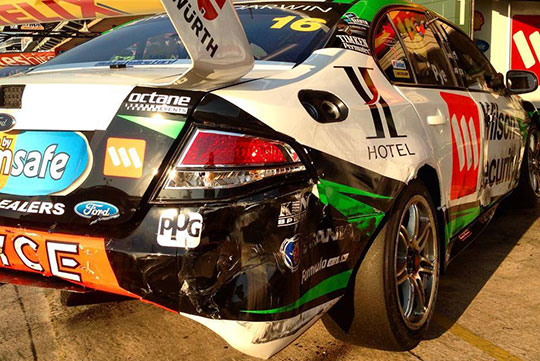 Lee Holdsworth has been docked 25 points following a clash with Scott Pye in the final race of the SKYCITY Triple Crown in Darwin.

Holdsworth in the #4 Erebus Motorsport E63 AMG V8 Supercar had made up six spots over the final laps from 19th after switching to the soft tyre compound, but in the battle for 12th collided with the rear of Pye’s Wilson Security Racing Falcon on the final lap.

Both cars were able to continue with Holdsworth taking the spot, but the incident at Turn 6 on the Hidden Valley circuit dropped Pye down the order to 14th.

After a power steering setback in Saturday’s second 100 km race forced him into retirement, Holdsworth’s strong finish looked to have minimised the points loss to keep him in 12th in the Drivers’ standings. However, the penalty now sees him drop back to 13th place, 24 points behind Nissan Hornets’ Michael Caruso and a further 44 points behind Holden Racing Team’s Garth Tander.

The Championship now moves on to North Queensland for the seventh round on the calendar, the Townsville 500 from 4 – 6 July.