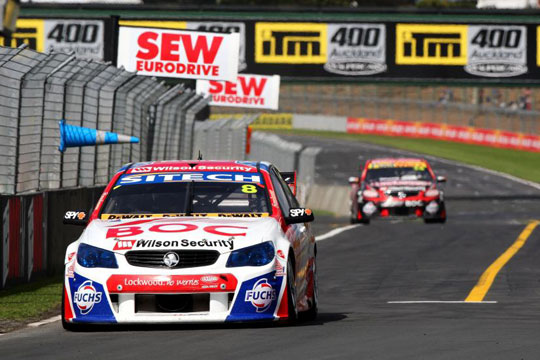 Jason Bright has won the inaugural Jason Richards Memorial Trophy with a decisive victory in the final race of the V8 Supercars ITM Auckland 400 in Pukekohe.

Bright lost the lead off the line to Jamie Whincup but soon regained top spot with a clean move into the hairpin on lap ten.

The Team BOC Holden driver then pulled 5 seconds clear to claim his second win of the 2013 season and the most points scored over the four races of the ITM Auckland 400.

Bright’s victory meant there were four different winners in the weekend’s four races.

The Jason Richards Memorial Trophy was presented to Bright by Richards’ wife, Charlotte, and two daughters Sienna, 5 and Olivia, 3.

“I left last week saying this is the one I really want to win,” said Bright.

“I put a lot of thought into it. The whole team wanted to take that trophy back to Albury. I was awake all last night thinking about it and I was gutted when I qualified 12th this morning.

“Sitting on pole I had tears in my eyes watching Charlotte and the kids in front of the car. We thought about nothing but that trophy all weekend and it’s a very special thing to take it home; one of the most memorable moments of my career.”

Will Davison finished fifth, narrowly missing out on the trophy, but maintaining his lead in the Championship over Whincup by 31 points. James Courtney, Alex Davison, David Renyolds, Craig Lowndes and James Moffat rounded out the top ten.

Mark Winterbottom had been in contention for a podium before a left-rear tyre blow out saw him scamper to the pits and dropping to 24th place.

The V8 Supercars Championship now moves on to Perth for the Chill Perth 360 on 3-5 May.