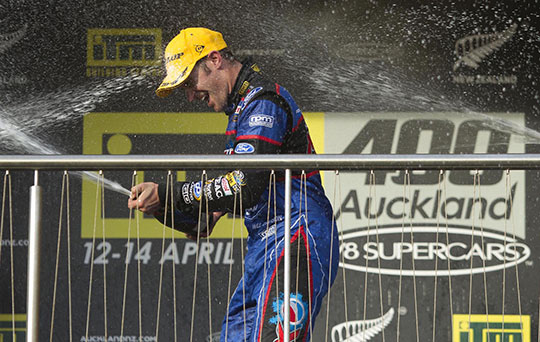 Will Davison took the chequered flag and the overall series lead with Ford’s first win of 2013 at the V8 Supercars ITM Auckland 400 in Pukekohe.

Davison assumed the lead after a mistake by Fabian Coulthard with eight laps to go cost the Lockwood racing driver two places. The move came after the third restart and moments before the safety car emerged again when Scot McLaughlin hit the wall at the final corner, securing Davison the win ahead of Shane Van Gisbergen and Coulthard. The damage to McLaughin’s Fujitsu Racing GRM Holden means the car won’t make it out for the weekend’s last race.

“We have taken good inroads with the car which is the main thing at this early point in the year,” said Davison.

“We are racing hard and smart and that is proving to be the right thing but the main focus remains improving the car in all areas.”

“It was great to record the first win for the year for the team and Pepsi Max’s first ever win and the fastest car all weekend was that of my team-mate so that is encouraging for everyone.”

Mark Winterbottom got the jump on polesitter Jamie Whincup at the start, but shortly after the second Safety Car, race two winner Whincup lunged at Winterbottom on lap 17 clashing with the #5 Pepsi Max Crew Holden. The tangle sent Winterbottom into the pits with steering damage and gave Coulthard and Davison the advantage as the pair slipped past.

Whincup then brought out the third Safety Car on lap 23 when he ran off the track unassisted into the sand trap after his foot slipped off the pedal. Both Winterbottom and Whincup returned to the track but finished 23rd and 24th respectively.

Craig Lowndes and Garth Tander rounded out the top five ahead of Jason Bright who has pole for Sunday afternoon’s race. David Reynolds, Jonathon Webb, Alex Davison and Rick Kelly completed the top 10.

The inaugural Jason Richards Memorial trophy will be awarded to the driver that has the best combined results over the weekend after the final race.