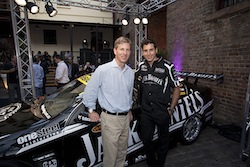 The team, currently known as Kelly Racing, is owned by brothers Todd and Rick Kelly and was formed in 2009.

In 2008 Todd Kelly competed in the familiar black and white hues for Perkins and then in 2009 Jack Daniel’s commenced their current association with Todd and Rick Kelly when they formed their own independent racing organisation.

Since 2009 Jack Daniel’s has enjoyed a successful partnership with Kelly Racing that has included a round win in Hamilton (New Zealand) in 2011 and race wins at Sandown, Hidden Valley and Hamilton.

Marshall Farrer, Managing Director Australia/New Zealand Brown-Forman Corporation, said, “This is an exciting time for both Jack Daniel’s Australia and Kelly Racing. As we head towards 2013 and the all-new Nissan Car of the Future, we look forward to building on our already strong partnership and continuing our positive results both on and off the track.

“Our partnership with Kelly Racing/Nissan Motorsport will allow us to continue to build on our strong responsibility messaging which has featured prominently on our car livery throughout our time in V8 Supercars. Both Todd and Rick mirror the vales of our organisation and we are proud to continue our support of their team”

Todd Kelly added, “Jack Daniel’s is our foundation partner and since the teams inception have cemented an outstanding partnership together.

“The Jack Daniel’s brand is something we are passionate about and were privileged to receive the opportunity to visit the distillery in Lynchburg two years ago.
“The visit highlighted the craftsmanship of the product and the commitment of their entire team which replicates the same values and principles of our team.

“We are immensely proud to represent the Jack Daniel’s brand in the future as we begin this new era under the Nissan Motorsport banner and look forward to rewarding their loyalty to our team.”