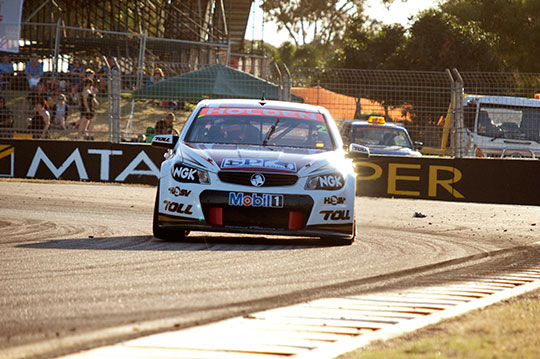 Garth Tander has ended a frustrating 58-race drought for the Holden Racing Team leading home a one-two victory for the team in the final race of the Sucrogen Townsville 400.

There were emphatic scenes as the Holden Racing Team (HRT) claimed their first win in 21 months, the last coming in 2011 when Tander and Nick Percat took victory in the Bathurst 1000. With team-mate James Courtney in second, the team broke another drought, taking its first one-two finish since Sandown in 2009 when Will Davison occupied the second HRT car.

The HRT pair got away well at the start with Tander moving from fourth to second during the opening laps of the race, before Lee Holdsworth’s  E63 AMG Mercedes came to a halt at Turn 11 on lap nine, capping off a horror weekend for the IRWIN Racing team.

With the safety car deployed to retrieve the stranded car, the Walkinshaw stable adopted an alternate strategy to most of the front-runners pitting all four of its cars on lap 10 for two stints on soft tyres.

Tander put the soft tyres to good use and despite clouting the Turn 10 exit wall and sending the car airborne as he weaved through the field, he took the lead of the race from Pepsi Max Crew FPR’s Mark Winterbottom on lap twenty-two. After the pitstop cycles were complete, the HRT duo were unchallenged over the final 20 laps.

Shane van Gisbergen pulled off one of the drives of the day to take the final podium spot. Bouncing back from yesterday’s pit stop dramas and being caught out by a red-flag marred qualifying session, van Gisbergen starting from 21st then survived a opening lap spin. The TEKNO VIP driver, like the HRT duo, opted to stop with the Safety car and subsequently spent most of the race on soft tyres.

After qualifying on pole, Mark Winterbottom led the opening laps but chose not to pit under the early Safety Car. Opting instead for the one-stop strategy, the Pepsi Max Crew driver still finished in a strong fourth place.

Supercheap Auto Racing’s Russell Ingall had incurred a two grid spot penalty after causing the red flag in qualifying, but staged a fantastic fight back from 26th to finish in fifth in his record-breaking 226th event start. A late move on fellow Walkinshaw stablemate Tony D’Alberto (Team Hiflex) denied D’Alberto the chance for a career best finish.

The rear of the field again provided the opening lap carnage when van Gisbergen was spun at turn two in an incident also involving Maro Engel (SP Tools Racing) and Todd Kelly (Jack Daniels Racing). The SP Tools racer suffered broken left front suspension, mirroring the damage teammate Lee Holdsworth suffered in yesterday’s race. The Erebus team were able to repair the damage and return him to the track, however he remained out of contention for the rest of the race. The incident was investigated by the stewards, but they found no case to answer.

David Reynolds (The Bottle-O FPR Ford) was forced into the garage early after his Falcon appeared to drop a cylinder. Reynolds re-joined the race and finished ten laps down.

Jason Bright (Team BOC) earned the ire of the stewards, receiving a pit-lane drive through penalty for contact with Michael Caruso (Norton 360 Racing). Bright’s stablemate David Wall found himself in the wall at turn eight with damage to the rear of his Wilson Security Racing Commodore, after a punt from Todd Kelly. The Brad Jones Racing driver was issued a mechanical black flag shortly thereafter for loose bodywork.

Finishing in eleventh position, Jamie Whincup has held on to his championship lead with 1591 points giving him a 111 point lead over team mate Lowndes. The Pepsi Max pair of Will Davison and Winterbottom sit in third and fourth, minus 215 and 254 points respectively. Van Gisbergen meanwhile has jumped in fifth 281 points off the lead.