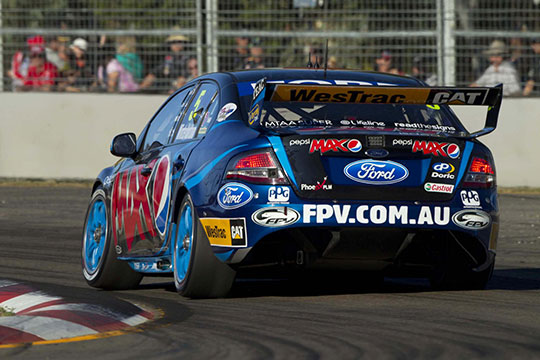 Mark Winterbottom has claimed pole position for the second 200km race of the Sucrogen Townsville 400.

In a red flag affected session and only seconds remaining on the clock, the Pepsi Max Crew driver leapt to the top of the time sheets with a 1:13.616.

Early in the session it had been Russell Ingall (Supercheap Auto Racing) leading the way with Todd Kelly (Jack Daniel’s Racing) and Lee Holdsworth (Irwin Racing) rounding out the top three. Many drivers had again elected to run on their wet tyres during the opening stages in an effort to conserve rubber, before shifting to the hard compound tyre for the remainder of the session.

Ingall was forced into pit lane after breaking a right rear shock on the exit of turn six. The incident ultimately caused red flag with a spring left in the run off area of turn six, with only 2.59 remaining on the clock.

As the green flag waved once more, Red Bull Racing Australia’s Jamie Whincup found himself under investigation for an unsafe release after he narrowly avoided contact with James Courtney (Holden Racing Team) in the haste to get back on the track and set a time. An investigation post-race decided no action would be taken.

Race 21 of the V8 Supercars Championship gets underway at 1535 local time.