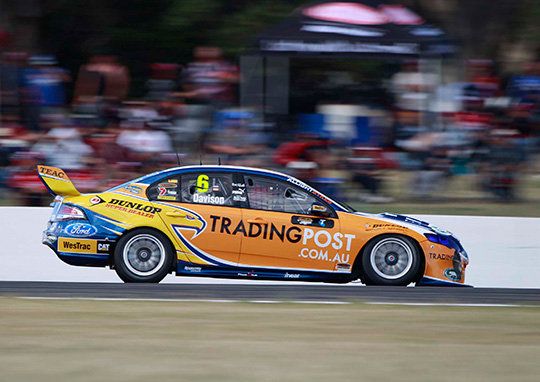 Ford Performance Racing enters the final round of the season looking to add to its most successful ever campaign, the last of the current era of cars.

With new cars, manufacturers and sponsors entering the sport in 2013 Homebush will be the last event of the current V8 Supercars era.

FPR claimed both pole positions and the final race of the year at the Sydney Olympic Park track last season and wants to repeat the feat to round out the season on a high.


DRIVERS’ VIEW
Mark Winterbottom – #5 Orrcon Steel FPR Ford:
“Last year in Sydney was very good to us and to win there in my home town was very special. Unfortunately I am not going back to fight for the title this year so the best thing we can do is win two races and hold second in the championship and go out on a high for the current era. The current cars have been very successful for our team so it would be great to send them off in the best way possible. Everything is new for next year which we are all looking forward to and that will pose different challenges, but after Homebush we all get a break so we can come back fresh and be better than this year.”

Will Davison – #6 Tradingpost FPR Ford:
“I left Homebush last year feeling a bit robbed so it is one of the events I’ve wanted to get back to all year and the track is certainly among my favourites. Hopefully I can secure the pole award and then more importantly go on to win the races as to do so would be hugely rewarding as it is a very challenging track. The format is demanding and with extreme heat expected it would be satisfying to win in such tough conditions. I want to get a big finish to the year to prove what we can do.”

David Reynolds – #55 The Bottle-O FPR Ford:
“I am really looking forward to finishing the year on a high. I have a good feeling about the weekend as our cars were quick there last year and we’ve only improved as the year has progressed. I’ve had a few bad rounds recently but all I want now is to have a happy end to the season at Homebush. It is The Bottle-O’s home race and we are on track to equal the team’s best ever season which in my first year I am pretty happy about.”

Tim Edwards – FPR Team Principal:
“While we head to the season finale with the title decided the final Ford verses Holden battle is set to be an epic contest. The top Ford and Holden teams have battled it out all year and I can’t see the fight being any less intense especially as there is nothing but pride to race for. We were strong at Homebush last year and there is no reason to believe this will be different this year so I am expecting a great event to round out the season.”

CIRCUIT: Sydney Olympic Park Street Circuit
LENGTH: 3.42-kilometres
DESCRIPTION: Set around the streets of the Olympic Park precinct the track is tough and challenging in many ways. A mixture of high and low-speed sections, divided by bumps, kerbs and camber changes give this all the hallmarks of a typical street circuit. Uniquely, the paddock area is inside a building alongside the pit lane complex.
TRACK RECORD: 1m28.38s – Craig Lowndes, 2011
FPR BEST RESULT: 1st – Mark Winterbottom, 2011