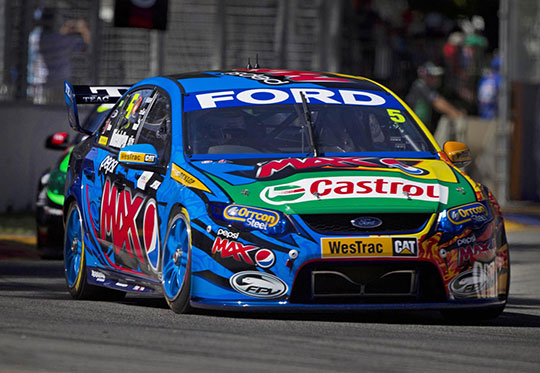 After dominating the MSS Security V8 Supercars Challenge at Albert Park in 2012, Ford Performance Racing is hoping to repeat the feat this weekend as the V8 Supercars once again headline the support-category at the Australian Formula One Grand Prix.

Mark Winterbottom won three of the four races last year, making it a clean sweep for Ford, only the second time ever that Falcon drivers have taken all the accolades at the event.

The weekend may be a non-championship round, but the #5 Pepsi Max Crew FPR driver is eager to retain his title and test out the new Dunlop soft compound tyre which makes its debut at the Grand Prix event.

“I really like the Albert park circuit so it is nice to be back to defend my title from last year’s event,” said Winterbottom.

“Getting on the soft tyre will be interesting as it is the first time we’ve used it in anger so I am keen to see how different people use it across the weekend.

“That will add some more spice to the racing too. It is also great to be an ambassador for the race. I support it because I enjoy it so much and V8 Supercars is such a big part of what makes this race so great.”

Keen to put on a show for the large crowds with a win, Will Davison added: “The Grand Prix is a one-off special event and as a race enthusiast I love being at the track and being a part of it.

“The V8 Supercar races have a massive following and we get to showcase what we do to fans that don’t always come to race tracks regularly so it’s nice to put on a show.

“The F1 teams like our racing and it’s cool to see them taking an interest in what we are doing.

“Fun aside, it is important that we maximise our chances this weekend as we are racing to win. We have a lot to learn with the new cars and I am really looking forward to giving it a crack on soft tyres.”

For The Bottle-O Racing Team’s David Reynolds it’s an easy commute from home to the team garage.

“I enjoy racing at Albert Park as I can actually see it from my lounge room,” said Reynolds.

“It is fast-flowing and has a very good surface as a lot of Formula 1 circuits do.

“It is nice to be part of the F1 season-opener as the event gets a lot of attention and it means we get to race in front of two massive crowds for our first two events of the season which is pretty cool.

“We’ve got four races and a great chance to try out the new soft compound tyre so I am looking forward to the event.”

JELD-WEN FPR’s Alex Davison is looking to build on the knowledge gained two weeks ago at the season-opener in Adelaide.

“I haven’t been looking forward to a race event this much for a while,” said Davison.

“We made really good progress in Adelaide with the car and with my driving.

“Our pace was really good in both races and this weekend is a chance to capitalise on what we learnt and continue to improve our cars.

“The one big advantage with four cars is lots of data so we can try a heap of ideas in practice and learn things that can move us forward quickly.

“It is another chance to get some good results and we all want to win so I am looking forward it.”

Mathew Nilsson, engineering manager at Ford Performance Racing says it’s a great opportunity for the team to learn more about the car but that they’ll be going all out for the wins.

“This weekend is a good challenge the team is looking forward to,” said Nilsson.

“It can be a hard track to set the car up at so a new car on this circuit poses excitement for teams and fans alike.

“Our first two outings of the season are at two extremely different tracks so it is a good chance to understand the intricacies of the new car and how it needs to be set up. It is a high-profile event and is always one we want to achieve at.

“Everything we do this weekend is aimed at getting the most out of the car and there will be no compromise to achieve a result so we will be giving it our all.”