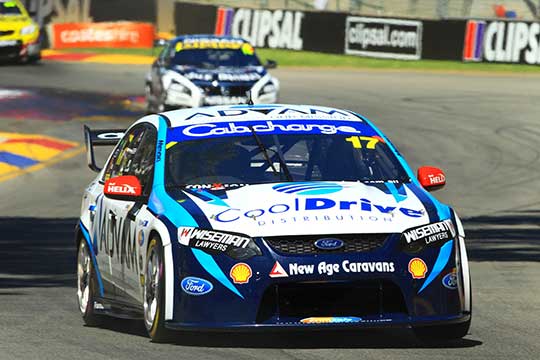 Wilson Security has increased its backing to both Dick Johnson Racing entries after Tim Blanchard’s #17 car raced with sister company ADVAM branding in the pre-season test day and at the Clipsal 500.

Wilson Security’s sponsorship concludes after this weekend’s event, but Dick Johnson Racing is hopeful that a further extension to the deal can be reached to the end of the financial year. And the importance of the Australian Grand Prix race meeting is not lost on team owner Dick Johnson.

“DJR has a long, successful history at the Grand Prix both here in Melbourne and in Adelaide,” said Johnson.

“I recall launching the Shell Ultra sponsorship era in Adelaide and we had success with the Jim Beam cars in Melbourne a number of times. The event is very important from the racing and the corporate aspect. DJR have raced at every AGP since 1985 so we are always keen for success at this event. We are going to get both DJR cars as far up the field as we can.”

Both cars returned from Adelaide with only minor damage to the #12 Wilson Security Falcon, and Dick Johnson Racing general manager Steve Johnson hopes the time spent engineering the cars will see the gap to the front runners close up.

“The whole DJR team did an outstanding job in Adelaide,” said Steve Johnson.

“Everything was new. We had turned very few laps and the drivers were working with their engineers for the first time in a race environment, so overall it was a very positive start.

We focus on Albert Park like any other race meeting. My goal is to move the two cars up the grid in qualifying and in the races this weekend.”