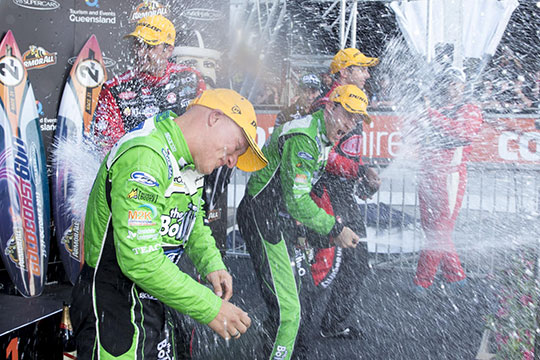 After his maiden V8 Supercars race victory in the Sunday Gold Coast 600 finale at Surfers Paradise alongside co-driver Dean Canto, David Reynolds described the win as “a massive relief”.

The 28-year-old started the race from pole and led the early stages, handing the #55 Bottle-O FPR Ford to Canto who continued in the lead for much of his stint before returning the car to his endurance team-mate in a close second place behind James Courtney.

Reynolds secured his breakthrough win after taking the lead with 15 laps to go when the notorious beach-front chicane put pay to Courtney’s race forcing the HRT driver to retire with a broken steering arm.

“As soon as I crossed the line it was a massive relief and I just thought it was cool to have won. It was just awesome as I was spent as I was trying to keep the car off the fence while also manage the gap to second place,” said Reynolds.

“Through the last sector it was particularly hard but we managed to bring it home. James (Courtney) was pushing hard and if he hadn’t made that mistake I don’t think I would’ve caught him. He was taking big risks when I wasn’t going to.

“I had a great day – pole position and my first win. Today is a great achievement and everyone at FPR has brought me to this point so it is a great reward to finally win a race.”

Reynolds’ sentiments were echoed by co-driver Dean Canto who had every confidence in his good friend.

“Today is very special and I am a bit emotional as I won’t work with Dave until this time of year next season but it was a tough day and I am really proud of my little mate.

“When Dave is in the car I know he is capable of keeping it straight and off the walls but I had full faith in Dave and we’ve had the pace in every Enduro Cup race so it is great to finally get a win.

“Yesterday I made a mistake when I hit the pit limiter so I wanted to make it up to him today. The team did a great job, Dave putting it on pole helped and the strategy calls were the right ones all the way through the race.”

The win marks the second victory for the Rod Nash Racing team since its inception in 1999, the first coming at Sandown in 2010 during the team’s first year in the Ford Performance Racing fold. It was also the third Sunday win on the Gold Coast in as many years for the factory Ford team and comes just weeks after Reynolds and the team recommitted to each other until at least the end of 2015.

“That win for Dave was a long time coming as Dave has certainly had the ability for a long time. He’s been with us for nearly two years and hadn’t quite cracked it,” said team-owner Rod Nash.

“After his second place at Bathurst last year he dropped off a little but this year he has slowly but surely been finding his way back and in the last few events he has been very strong.

“Bathurst was a great race for both Dave and Dean without a result and they were just as strong on the Gold Coast just with more luck. Yesterday was a mixed race for most teams but today we smashed it with pole and ran a nice consistent strategy. The car was straight and voila – chequered flag.”