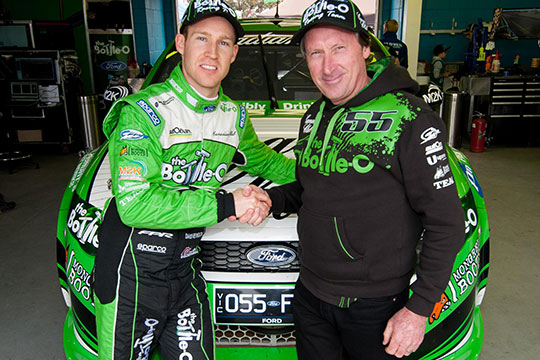 David Reynolds will remain the #55 The Bottle-O FPR Ford for the next two seasons after signing a new deal with Rod Nash Racing.

Now in the second year of his existing two-year deal, Reynolds is delighted to have committed his future for a further two years with the team.

“I really like driving for Rod and RNR and being part of the big FPR family is where I want to be,” said Reynolds.

“We’ve had some success but we both want to build on that and take everything to the next level so there was never any intention to do anything but keep driving for Rod.”

“The Bottle-O has been a big supporter of his team for many years and they have been great to work with. I think we suit each other really well and by the end of my current deal I will be their longest-serving driver so I am looking forward to repaying their loyalty on and off track.”

The decision to remain with Nash ends speculation about a move away from the team given the recent uncertainty around Ford’s V8 Supercars involvement, with Reynolds, Will Davison and Chaz Mostert all without confirmed drives for 2014.

“There has been constant dialogue with Dave throughout the course of the year about him remaining with the team beyond 2013 and we are very pleased we’ve been able to sign him for at least the next two seasons,” Nash said.

“We enjoy a long-term association with our title-sponsor The Bottle-O and now both they and Dave are with us until at least the end of 2015 which provides great continuity both commercially and for our engineering team.

“Dave is now starting to hit his strides after coming to grips with the new car at the start of the season and we see no better place for him to take the next step than here as part of the broader FPR family.”