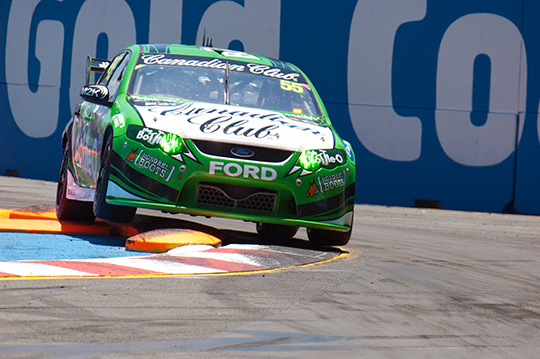 David Reynolds has scored his first career V8 Supercars win with victory in the ARMOR ALL Gold Coast 600 finale.

Opting to start off the line, the Bottle-O Racing FPR driver was challenged early by James Courtney who charged through the field with pace to burn. After giving chase over the closing stages, Reynolds seized the lead with 15 laps remaining when Courtney’s race was dramatically cut short with broken steering, the Bottle-O Racing FPR Ford crossing the line unchallenged giving victory to Reynolds and co-driver Dean Canto.

Starting from 16th, Fabian Coulthard in the Lockwood Commodore, repaired after yesterday’s suspension damage, threaded his way through the field, holding off Russell Ingall (Supercheap Auto Racing) in the dying laps to take second. For Ingall, it was the first time he’s been on the podium since Queensland Raceway in 2009.

The first lap again provided mayhem down the lower order with David Brabham (Heavy Haulage Australia Racing) spinning through the first chicane. Marc Lieb (Team Tekno Darrell Lea) then collided with the driver’s door of the Mercedes as he sat stationary on the track.

In the opening stint of the race Lowndes’Red Bull Racing Australia co-driver, Warren Luff found the wall at turn 11 courtesy of a shunt from Steve Owen in the Pepsi Max Crew Falcon. Stewards investigated the incident and opted to take no action over the move.

The Safety car made its first appearance on lap twenty with Scott McLaughlin stopped (Fujitsu Racing GRM) on the track at the entry to pit lane, suffering the same electrical issue as Saturday. The majority of the field elected to pit under the Safety car with only seven staying out on track. The race restarted on lap 24.

Steven Richards (Pepsi Max Crew FPR) was back in the pits two laps later with a broken left rear shock and rear sway bar. The repairs were affected in pit lane and the car returned to the track two laps down, leaving Winterbottom to come home in 18th, 88 points off the top of the standings.

After a strong performance in Saturday’s race the Team Hiflex Commodore of Tony D’Alberto and Jonny Reid found itself in the wars, receiving two mechanical black flags for loose bodywork on the front splitter. The pair finished the race in twenty-first, three laps down on the leaders.

The first retirement of the day came on lap twenty-eight with Todd Kelly and David Russell’s Altima dropping a cylinder. McLaughlin’s car was then in the garage two laps later, although he was able to return to the track, finishing the race ten laps down in 23rd position.

The SP Tools Mercedes was served with a Pit Lane drive-through penalty for a driving infringement after colliding with Greg Ritter (Fujitsu Racing GRM) at turn 11. Their day was further compounded when a mirror incident of Saturday’s suspension damage to the right rear forced them into the garage. Fellow Erebus drivers David Brabham and Tim Slade had their own drama with their damaged car. The driver’s door became jammed after the opening lap collision and the pair had to conduct their driver change through the passenger’s door.

A second Safety car has bought out on lap 65 after a sickening collision between Team Tekno VIP’s Shane Van Gisbergen and Hogs Breath Cafe Racing’s Scott Pye, as the latter exited the pits on cold tyres. Pye hit the wall at turn two as he skated wide and Van Gisbergen and was unable to avoid the rear of the Commodore. Craig Lowndes (Red Bull Racing Australia) was lucky to avoid the incident barely missing Pye’s car as he passed at high speed. Pye was able to get his car back to the pits but the damage to the front end of Van Gisbergen’s Holden was too severe and he parked it on track.

At the head of the field Courtney was charging until the #22 Holden Racing Team Holden broke a steering arm. Components were seen flying out of the left side of the car over the back chicanes and he fired towards the wall at turn eleven barely missing the wall. He limped back to the pits, his day done.

James Moffat suffered severe damage to his Norton Hornet, another victim of the back chicanes, breaking the front and rear suspension on the right side. The Nissan driver was able to make it back to the pits where his car spent the remainder of the race.

Eighth place into today’s race was enough for Craig Lowndes and Warren Luff to claim the inaugural Pirtek Endurance Cup and maintain Lowndes’ lead in the championship standings (2549) with Whincup just 6 points behind. Winterbottom is 88 points back with Will Davison 121 points off the lead. Fabian Coulthard is in fifth position 396 points back from Lowndes.

The V8 Supercars are next in action at Phillip Island November 22-24.