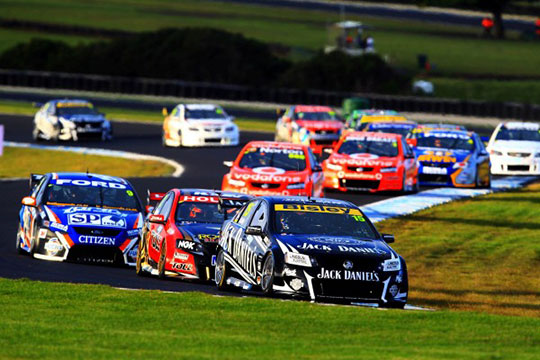 V8 Supercars will carry out an emergency tyre test at Phillip Island amid fears of a repeat of the tyre failures seen during MotoGP’s visit to the circuit in October.

Excessive degradation to the tyres led to the MotoGP race being shortened on safety grounds and a first ever mandatory mid-race bike change, after supplier Bridgestone was unable to guarantee the safe performances of its rear slick tyres beyond 14 laps.

The Phillip Island circuit was resurfaced in December 2012 creating a slightly grippier surface (and consequently putting more heat into the tyres), but the MotoGP tyre allocation experienced extreme temperatures which affected their durability.

The circuit will host the penultimate round of the 2013 V8 Supercars Championship later this month and will feature the last 60/60 configuration Super Sprint format on the Saturday and two 100km races on the Sunday.

Walkinshaw Racing-contracted driver Nick Percat will take to the track to assess the wear sustained by the Dunlop control tyres on the high-speed circuit over two full race runs, one 60km and one 100km, to simulate the event’s race distances.

Speaking to Australian newspaper, the Daily Telegraph, Jamie Whincup says he doesn’t expect a repeat of the MotoGP debacle, but commended the decision to undertake the test.

“It is a good thing they are doing because it is one less variable we will have,” said Whincup.

“Lots of things get thrown at you during a race weekend and you have to deal with them.

“Nick’s data, I am sure, will be shared with all the teams and we will have a look at it and see where we are at.

“It is a good thing that V8 Supercars are spending a bit of cash to make sure we don’t run out of tyres.

“Bikes are very different to cars. Usually more grip means more speed on four wheels and also less sliding. That actually makes the tyre last longer because the sliding is where the damage is done.

“We all saw what happened in the MotoGP and it certainly raised some concerns but I can’t see that happening in our cars.”

The Sargent Security Phillip Island 360 takes place between 22 and 24 November.