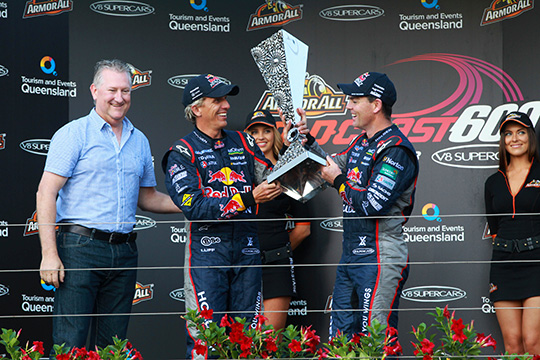 Coming into the Gold Coast 600 weekend, there were 12 teams in mathematical contention, but it was Craig Lowndes and co-driver Warren Luff who left Surfers Paradise as the newly-crowned inaugural PIRTEK Enduro Cup winners.

Even so, the Championship within a Championship was still wide open ahead of the second 300km race with four combinations still in the running. The #888 car still had to avoid a crash with Scott Pye and double stacking in the pits before a strong final stint to eighth place at the chequered flag assured Lowndes and Luff of the win in the race for the Cup and maintained Lowndes’ slim lead in the V8 Supercars Championship.

“It was one of those days with near misses for everybody,” Lowndes said.

“With a bit of good fortune and luck we managed to finish strong, get those crucial championship points and hold onto our lead.

“To bring home the Pirtek Enduro Cup is an incredible feeling and full credit to Luffy and all of the team for making that happen.

“It was fantastic to win this inaugural version with Warren. I think the concept from the Queensland artist that created the trophy is a unique one, which makes it a little more valuable.”