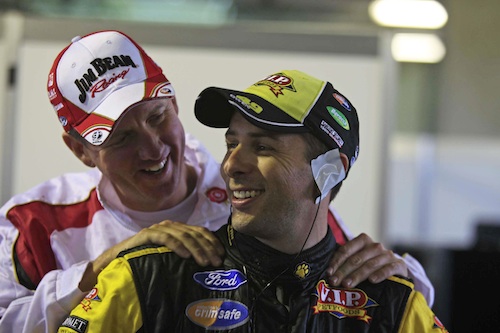 Saturday at the Supercheap Auto Bathurst 1000 saw the team head out for their final 50 minute practice before Sunday.

Team Norton DJR did not get in the practice laps they were hoping for this morning.  Ian Walburn, Engineer for Car #17, “We’d fitted all our race running gear last night, including a fully serviced tail shaft and we had a failure first lap which look out the oil lines.  The boys will fix it up this afternoon ready for the transformation to Tru-Blu tonight and the race tomorrow.”

Steve Johnson, driver, Jim Beam Racing, commented, “As a race car it feels okay, its behaving a little bit better than it was yesterday.  We have concentrated on race car set up, as unfortunately we don’t have to worry about the shootout.  Allan went out on some better tyres at the end and he said it was good, but with just a little bit of under steer, which is not too bad and we will tidy up.”

Nathan McCall, Engineer, on Dean Fiore’s Jim Beam Racing Falcon, “We were pretty happy with the balance, but we now just need to find a bit more turn on full tanks.  We didn’t really run any good tyres in that session, but happy with what we got on old tyres.  The car is nice and straight and we are ready for tomorrow.”

Blake Smith, Engineer on the V.I.P. Petfoods car for Steve Owen, “We focused purely on race car and getting some more miles for Paul in the practice session.  He hasn’t done a lot of miles this weekend and we just wanted to get him more comfortable in the car.  We are chasing a little bit of a vibration in the brakes, and we’ll be making sure we get this right for the race.  The shootout is a whole different thing, the rubber that goes down beforehand is probably going to put us at a deficit, so we don’t stand to gain a lot, so focusing purely for tomorrow, it’s a long race.”

Steve Owen was the second car out on track for the Top 10 Shootout after finishing qualifying in 9th place.  The lap did not go to plan as Owen struggled for pace.

“Yesterday, I felt like I dragged the car into the Top 10 and today we proved that we didn’t deserve to be there,” said a disappointed Owen after the Shootout.

Some of the team will focus overnight on transforming the Team Norton DJR Falcon from it’s usual, distinctive yellow and black livery, to the retro livery inspired by 50 years of Bathurst and Dick Johnson’s famous 1981 win on the Mountain.

The Team Norton DJR Tru-Blu 2012 will be unveiled at the team garage tomorrow morning.