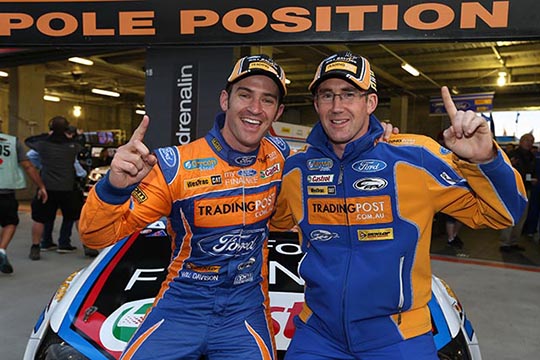 Ford Performance Racing’s Will Davison has claimed pole position for the 50th anniversary edition of the Bathurst 1000, giving him the best possible starting position for tomorrow’s 161-lap race.

Winterbottom will start from the second row after setting the fourth-best time in the shootout. He dropped time in the first sector of the one lap dash and while he recovered most of the time, he finished 0.13s back.

David Reynolds was the first car to set a time in the shootout and while he jumped two places to eighth, he was unable to set a time to compete with the later runners.

Davison and co-driver John McIntyre were pleased to secure top spot in such a special edition of the great race and enjoyed the thundering applause of the crowd as Davison’s pole was confirmed at the end of the session.

Winterbottom: “I am really happy with the day. We topped practice this morning and made a small change to the car in the shootout, but I locked a tyre at the first corner and dropped two-tenths (of a second) and that was the difference today. I was fast in the last two sectors of the lap and fourth is in no way a disaster. Pole is great for Will and the team and while it doesn’t give us the win it is a big boost and is nice to achieve. All round I think we are looking good for tomorrow and we have improved from a day ago so we are where we need to be heading to the race start.”

Davison: “I didn’t think I would get pole after my lap and watching Jamie (Whincup) on his lap I thought he was going to beat me so it was a pleasant surprise when we landed pole. The shootout is dramatic and exciting but means nothing for tomorrow, though it is pretty cool to achieve it in what were very tricky conditions. I monitored everyone else’s laps at the start to see what the track was like but once I got in the car I had a few big moments and pushed hard and while it wasn’t tidy, it was enough. The crowd’s roar was phenomenal and the team’s reaction was special so I am looking forward to tomorrow.”

Reynolds:  “We improved our starting position by one row so we have to be happy with that, though the results today don’t mean a thing as Bathurst can be won from anywhere on the grid. The car is better than it has been which is encouraging and we will just see what the weather brings. It is a long race and as long as we have no major issues we should be well-placed to be in the mix late in the race.”

Tim Edwards – FPR Team Principal:
“We are all extremely pleased to secure pole position for Bathurst. If there is one pole you want each season it is this one. The shootout here is the tensest qualifying of the year and the battle between Will and Jamie (Whincup) was extremely close so coming out on top is fantastic. Frosty was unlucky not to be on the front row and was very quick in the last part of the lap but fourth here is fine. David improved his overall grid position so all the team must be happy with our efforts. Tomorrow is the big day though and we all know how hard it is to win here so we know only our best performance and a bit of luck will deliver success.”