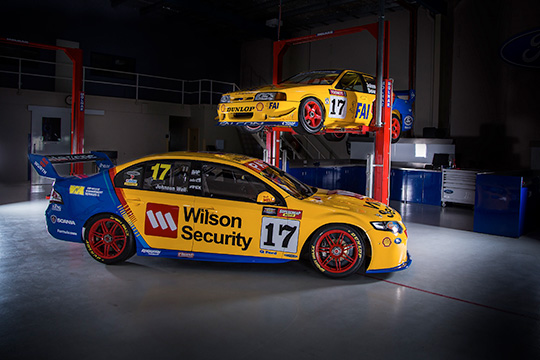 The livery scheme will celebrate the 20th anniversary of Dick Johnson and John Bowe’s victory in the 1994 Great Race behind the wheel of the EB Shell – FAI Racing Falcon.

After the 1994 race Dick said, “In my mind there’s no question this was my best win there, and I know it’s the one I’ll remember as being something very special. I always felt we had the fastest car out there and the best overall package, but in the wet opening stages we couldn’t show the legs we knew we had.

“This year we really had it right!’ John Bowe added, “What a race..what a result! We could not have picked a better race to win. I have been with Dick for seven years now and this win stands out as something special, the best ever.”

The 2014 retro design follows the replica 1980 Tru Blue livery made famous when Johnson hit a rock while leading the race which was reproduced in 2012 to celebrate the 50 years of Bathurst festivities, and the Green’s – Tuf livery seen on the team’s FG Falcons in 2013 to mark of 30 years since Dick Johnson’s monumental crash at Forrest’s Elbow during qualifying and the subsequent effort to get Johnson onto the start line.

The livery which retains the branding of naming right sponsor, Wilson Security, was unveiled to the public today at DJR’s Headquarters in Queensland to an audience of over 7000 people.