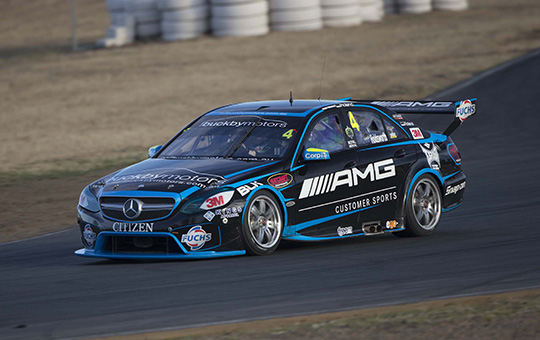 Erebus Motorsport will contest the Coates Hire Ipswich 400 with an upgraded engine package that has been put through its paces in testing this week.

New engine components were tested on both the Erebus Mercedes-AMGs at Queensland Raceway on Wednesday.

While the engine upgrades are expected to offer a performance increase, Erebus Motorsport general manager Ross Stone was quick to point out they are just part of of a five step development plan.

This set of upgrades follows on from the first improvements brought in for the start of the season and the lightweight flywheels introduced at the last round in Townsville.

“It’s the next area that we’ve worked on and it will move to both cars for the race meeting,” Stone told Speedcafe.com of the upgrades.

“The engine is not quite good enough yet but it’s not that far away either.

“It’s such long lead times developing these things so it won’t be massive, but it’s the first part of a few things we need to do before we have the complete package.”

The next round of upgrades are likely to be ready for the Sandown 500, after the team’s next test day in September.

“Because of what we’re doing it needs to be done on test days,” Stone said of when the next package will be ready.

“We’ve only got one test left so it really has to be done and dusted before that, leading into Sandown.”

Despite being competitive at Queensland Raceway last year, where Tim Slade qualified fourth on the Sunday, Stone is downplaying the effect the engine upgrades will have.

“It’s the old story in V8 Supercars that if you’re doing this year what you were doing last year you’re going to get left behind,” said Stone.

“You really don’t know until you get there on the day and everybody is on the same tyres under the same track conditions.

“We’re not doing handstands thinking we’re going to be on pole or anything like that but it’s definitely an improvement.”