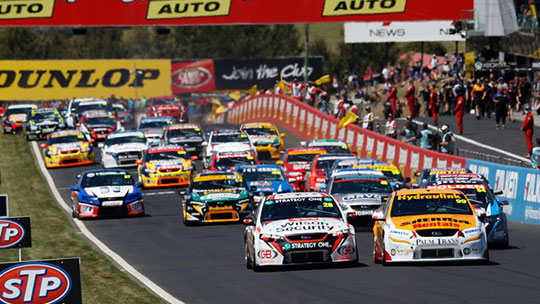 V8 Supercars second tier category, the Dunlop series will hold its own mini-enduro this year, running a 250 km race at the Supercheap Auto Bathurst 1000 in October.

The regular two 40 minute race format used this season will make way for a single feature race that includes a pit stop for all four tyres and fuel, and the option to compete with or without co-drivers.

The race will take place on Saturday 11 October, ahead of the main game’s ARMOR ALL Top 10 Shootout.

The interest generated by the recent Bathurst wildcard opportunities prompted the change in event scheduling, with several Dunlop Series teams expressing enthusiasm in entering, before V8 Supercars stipulated entries must conform to V8 Supercars regulations and Dunlop Series cars would not be allowed to compete.

Support for the single race was almost unanimous, and if successful could lead to the continuation of the new format in the coming years.

The V8 Supercars development series has previously run a single-race format over 150 km at Bathurst as a non-points paying event between 2001 and 2004.

Specific details are still yet to be confirmed by the V8 Supercars Commission, with Championship points, co-driver eligibility and other format changes still needing to be finalised.

Brad Jones, commission member and team principal of teams in both categories, welcomes the addition to the racing on the Saturday.

“This is the opportunity for Dunlop Series drivers to get a bigger taste of what it’s like to do the Supercheap Auto Bathurst 1000,” Jones told v8supercars.com.au.

“We were looking for a blockbuster on Saturday at Bathurst, and a Dunlop Series race fits the bill perfectly.

“It’s going to get great TV exposure, pit stops and the option to run two drivers are pretty exciting, and a longer race gives them the opportunity to get their eye in.”

Ford Performance Racing boss Tim Edwards, also a team principal in both series, says the move was well received when discussed with Dunlop Series teams at the Townsville event in July. Edwards described the lengthening of the race distance as an extension of the move to increase race time for 2014 and an opportunity for Dunlop Series drivers to prove themselves to potential employers.

“Quite often the jump from Dunlop Series to the main Championship is quite a big step – when they are doing shorter races, it’s an even bigger step – so the first thing was to increase the length of all their races this year,” Edwards told v8supercars.com.au.

“To give them their own showcase event this year on Saturday is fantastic.

“250km – for those who do it by themselves – is a fair odd challenge for them and they get to prove themselves. And there’s no better stage to do it on than Bathurst.

“I think it’s a great way to showcase their talent and their sponsors.”