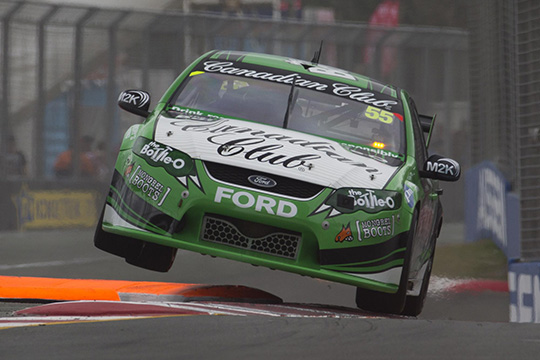 David Reynolds has led the way in a frantic thirty minute qualifying session to take pole ahead of Nissan’s James Moffat in the second Armor All Gold Coast 600 race.

The Bottle-O Racer jumped to the top of the timesheets in the closing minutes of the session, setting a new lap record of 1.10.0480 and claiming his second pole position of the season in the process.

Saturday race winner, Craig Lowndes heads an all Red Bull Racing Australia second row of the grid, alongside teammate Jamie Whincup who bounced back after yesterday’s drama setting competitive times throughout the session.

After team-mate Greg Murphy ended the opening race in the wall, James Courtney in the rebuilt Holden Racing Team Commodore came out fighting, setting the fastest lap with a little over ten minutes remaining. His time looked unbeatable until the final race to the flag, and he was pushed back to fifth on the grid.

Irwin Racing’s Lee Holdsworth featured in the top half of the field throughout most of the session, holding the top spot for much of the session before finishing in sixth, the highest finishing of the Erebus Mercedes.

Pepsi Max Crew FPR’s Will Davison improved his times over the final stages of the session but toppled to seventh at thr close. Team-mate Mark Winterbottom could only manage 11th, behind Garth Tander (Holden Racing Team), Chaz Mostert (Wilson Security Racing) and Michael Caruso who capped off a strong session for the Nissan Motorsport outfit, which saw all four Altimas feature in the top ten over the course of the session, before the final times were set.

Fujitsu Racing GRM’s Alex Prémat found the wall in the dying seconds of qualifying and will start from 22nd, while teammate Scott McLaughlin will have an engine change prior to the start of the race after continuing electrical dramas carried over from yesterday’s race. McLaughlin will start on the back row in 28th alongside Jason Bright in the repaired Team BOC Commodore who was forced to miss the opening race after a massive crash in practice on Friday.