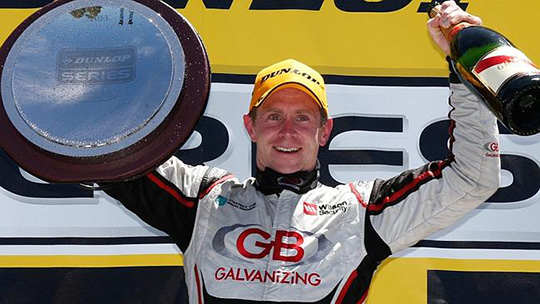 Reigning Dunlop Series champion Dale Wood will step up to the V8 Supercars Championship this season with Brad Jones Racing.

The 30-year-old clinched last year’s development V8 series with three wins and a string of seconds.

“This is an amazing opportunity, it’s a quality car and a quality team and I will have the chance to not only race against the best new talent from the development series but also against some of the most successful experienced drivers as well,” said Wood.

“I want to thank my group of sponsors that have made this possible and Brad and Kim (Jones) as well.

“I know many other drivers wanted and also deserved this opportunity and to actually see it all finally come together for me is awesome.

“Gian and Vince from GB helped put the plan in motion for last year and Matty White gave me the car capable of winning the 2013 Dunlop series championship which in turn lead to this opportunity.”

Wood has raced in the main series before, starting the first 10 races of the 2009 season with Kelly Racing. He has also contested six endurance campaigns with strong co-drives alongside Tony D’Alberto and Chaz Mostert in recent endurance seasons.

“Having a 2013 series champion in Dale join the team is a really good fit and he will have some immediate benchmarks in not only his two team mates but also the other guys that have also stepped up from the Dunlop Series,” said Jones.

The Team Advam/GB Galvanizing car will first be seen at the Sydney Test Day with the brand new livery set to be revealed this week in a break from tradition.

“The way the sponsors have worked in with the design has also helped, as I am in the sign business I need a good looking car and I certainly got that!”