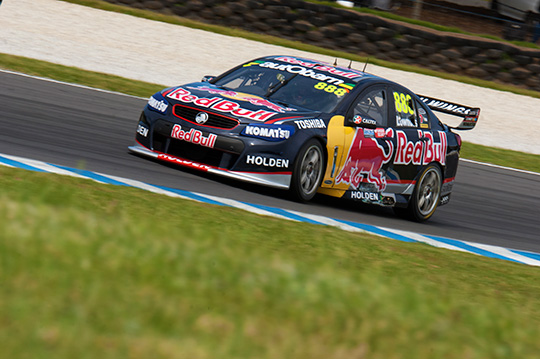 Lowndes lost the Championship lead to Whincup in Saturday’s race, and could only manage eighth in qualifying for the race, but he bounced back emphatically gaining five positions by the first corner, courtesy of a poor get away from front row starters Fabian Coulthard and Jason Bright.

In the first of two 100 km races, the field ran down the front straight approaching turn one four wide before Whincup emerged at the head of the field with Chaz Mostert in second.

Lowndes immediately took the fight to Mostert, duelling with the young gun for second position through Lukey Heights with Lowndes coming off second best. Contact then forced him wide and he fell to fifth, with Shane van Gisbergen moving up to second spot, ahead of Mostert and Coulthard.

By lap 11 Lowndes had fought his way back into third and two laps later put a move on van Gisbergen causing the Kiwi to run wide.

Whincup’s lead, which was out to over five seconds was then diminished as the field was compressed under the Safety Car to clear the stricken Norton Hornet of Michael Caruso.

On the restart, Lowndes was on the rear bumper of Whincup and a lap later overtook his teammate and Championship rival for the lead. In almost a carbon copy of Whincup’s move on Mark Winterbottom yesterday, Lowndes slipped through at turn four with five laps to go, to lead home a Red Bull Racing one-two.

Mark Winterbottom had qualified in third, but fell back to seventh in the fight for the first corner and could only make up one place by the finish.

At the flag it was Lowndes from Whincup, van Gisbergen, Mostert, Coulthard, Alex Davison, Winterbottom, Will Davison, David Reynolds and Garth Tander in the top-ten.

Whincup retains the championship lead on 2715 with Lowndes six points behind. Winterbottom is 116 points from the lead, Will Davison is 191 points adrift and Coulthard sits in fifth, 396 points from Whincup.