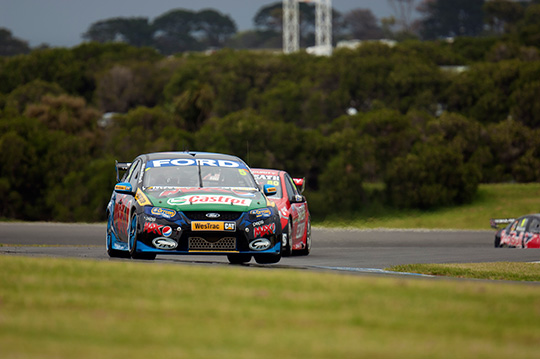 Fabian Coulthard and Mark Winterbottom have claimed pole for race 33 and 34 respectively on the final day of the Sargent Security Phillip Island 360.

Following his puncture in Saturday’s race, David Reynolds again had issues with the right rear tyre on his Bottle-O sponsored Falcon and was forced to pit in the opening minutes of the session.

Minor contact between Whincup and the Norton Hornet of James Moffat at turn four is being investigated.

Scott Pye narrowly avoided further contact with Moffat after an off at turn four, as he attempted to re-join the track.

Winterbottom led the field through the majority of the session with his time challenged only as the final flying laps were undertaken.

Bright and Coulthard will share the second row of the grid, though their positions will be reversed for the second race.

Behind the Brad Jones Racing pair, Whincup will line up in fifth, ahead of Shane van Gisbergen.

Rookies Scott Pye and Chaz Mostert both qualified in the top ten, sitting in seventh and ninth respectively, the pair split by the Norton Hornet of Michael Caruso, while Will Davison completes the top ten.