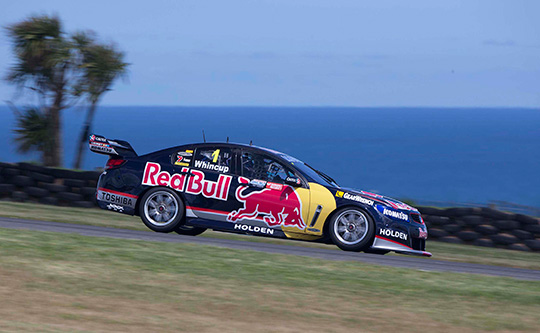 Jamie Whincup has extended his championship lead with victory in the final race of Sargent Security Phillip Island 360 weekend.

Whincup responded to his team-mate and title rival’s win in Sunday’s opener, notching up his tenth win of the season and will head into next month’s season finale and V8 Supercars title decider with a 20 point lead over Craig Lowndes.

Starting from the third row of the grid, Whincup needed just two laps to take the lead. Going around Jason Bright and Fabian Coulthard at Turn One, he then moved into second ahead of Mark Winterbottom on the exit of Turn 2, before passing Lowndes for the lead a lap later.

Lowndes had made a bold move on the outside of Winterbottom at Turn one temporarily taking the head of the field, but struggling for the rear grip he lost out to Whincup and then Winterbottom on lap three.

The Safety Car made the first of two successive interventions after Lee Holdsworth’s IRWIN Racing Erebus AMG Mercedes shed a left front wheel on lap 11 leaving him stranded at Lukey Heights. The wheel glanced Jonathon Webb’s car before bouncing over the fence.No spectators were harmed.

At the restart on lap 15 David Reynolds tagged Chaz Mostert into a spin at the Turn 4 hairpin. With nowhere to go Ingall ploughed straight into the side of the Wilson Security Racing Holden resulting in another appearance for the Safety Car. It was day over and a first retirement for Mostert this season while Ingall returned to the pits, but was also forced to pull out of the race with extensive damage to the Supercheap Auto Racing Holden.

With the field closed up again, Winterbottom got a good run at the restart, dicing left and right to put the pressure on Whincup, but was unable to make a move stick.

Whincup then responded with the fastest lap of the weekend on lap 20 with a 1:32.0246, before crossing the line 0.8 seconds clear of Winterbottom, the Pepsi Max Crew driver having to fend off a last attack from Lowndes in the battle for the second spot.

Bright and Coulthard followed suit in fourth and fifth, with Will Davison, James Moffat, Rick Kelly, Alex Davison and Shane van Gisbergen rounding out the top 10.

With just two laps Michael Caruso had been running in seventh but mechanical failure to his Norton Hornet ended Nissan Motorsport’s chance of three cars in the top 10.

The win sees Whincup leave Phillip Island as the championship leader on 2815, 20 points clear of Lowndes in second, with Winterbottom 124 points off the lead in third. With 300 points on offer at the Sydney 500, Will Davison is still mathematically in contention, but sits 223 points behind.