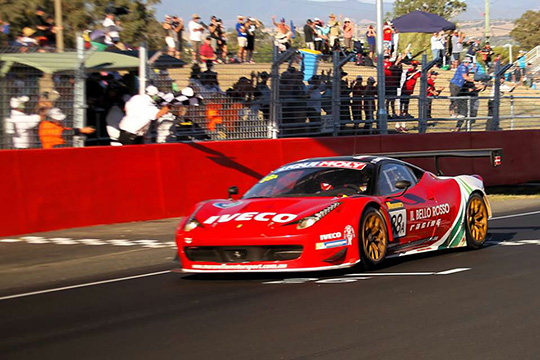 Red Bull Racing Australia driver Craig Lowndes will be back behind the wheel of a AF Corse-prepared Ferrari 458 when he contests his first Spa 24 Hours endurance race this July.

After his success in the Maranello Motorsport Ferrari at the Bathurst 12 Hour, Lowndes will again link up with the leading Australian GT team for the penultimate round of the Blancpain Endurance Series in Belgium.

Lowndes will partner fellow-Australian Steve Wyatt and two other drivers who are still to be announced at the July 26-27 Spa race, which sits in between the Townsville 500 and Ipswich 400 V8 Supercars events.

“I’ve driven at Spa before and it’s an incredible track,” said Lowndes, who raced at the Belgian circuit during his Formula 3000 season in 1997.

“After our success at the Bathurst 12 Hour in February this year, I just knew we had to put something together.

“I’ve been wanting to do more GT racing in Europe for a number of years, so to finally have such a great event locked in for 2014 is very exciting.

“The combination of a Ferrari and the Spa circuit really is a dream come true.”

Lowndes had hoped to make his Le Mans 24 Hours debut with AF this year, but other engagements in his schedule means he will have to put his life-long dream of competing in the 24-hour endurance classic on hold for another year.

“It’s no secret we did look at the option of doing the Le Mans 24 Hour this year, but other commitments were making that prospect quite difficult,”

“The timing of Spa works perfectly around the V8 Supercar calendar this year and gives us a good opportunity to build something big for next year. It’s the perfect scenario, really!

“Unlike Le Mans, there are no prototypes at Spa, so we will be outright contenders in the 458. But it will still obviously be a massive challenge, as a lot can happen going flat out around a place like Spa for 24 hours.”