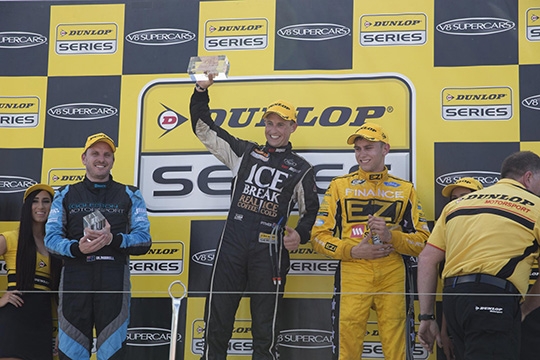 Pither, currently running fourth in the Dunlop Series with Brad Jones Racing’s Ice Break Racing, returns to the seat of the #21 V8 Supercar for a third consecutive season, having paired with David Wall for the last two years.

“I’m looking forward to getting back into the number 21,” he said.

“For sure the familiarity is advantageous and the miles I’ve been doing recently has definitely put me in a better position than I was last year for sure, so I’m really looking forward to racing and hopefully we’ll be in for a good result.”

Pither recently cut some laps in the car during a test day at Winton in June, and recorded his maiden Dunlop Series race win in Townsville last month, following it up with fifth place in the second race to secure the round victory.

“I really feel like I’m driving well at the moment, the first race win and round win (in Townsville) was awesome. It’s a combination of seat time, improving the car and I’m probably driving it better than I ever have as well.”

Team owner Brad Jones is pleased to have Pither back for the Enduro Cup events.

“I think having Chris back in the team for the third year is great news for us,” he said.

“He’s certainly growing as a driver and his results in the Dunlop Series recently show that we’ve definitely got the right bloke.”

Wood, who is set to compete in his first Enduro Cup as a lead driver after five years in a co-driver role is excited about the pairing’s potential.

“He’s doing an awesome job in the Dunlop Series at the moment and that’s a great confidence booster leading up to the Enduros.

“Hopefully he can carry that confidence through to us and we’ll have a great result. He’s a good bloke too, really easy to get along with and that’s important!”