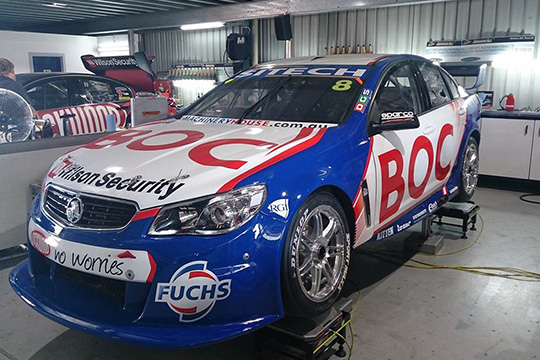 Luke Youlden will again team up with Lockwood Racing’s Fabian Coulthard while Andrew Jones will pair with Team BOC’s Jason Bright for a third straight season.

Jones who finished 17th alongside Bright in last year’s inaugural Cup, will also contest the Dunlop Series with the team.

“Andrew’s a great fit in the team and he’s also doing the Dunlop Series this year, so it means he’ll immediately be on the pace,” Bright said.

After crashing heavily at the Gold Coast in 2013, Jones felt that may have hindered his chance to co-drive with Bright again.

“We sat down after the event and I put my head on the chopping block but the team backed me and I’m grateful for that,” Jones said.

“The continuity in the team is really strong and it’s a privilege to be part of the group again for this year’s PIRTEK Enduro Cup.”

Back with Coulthard for a second year, after finishing ninth overall last year, Youlden says the timing of the partnership couldn’t be better.

“With the team hitting a purple patch, it’s a great time to be a part of it.”

Coulthard and Youlden scored the team’s best PIRTEK Enduro Cup result in the final race on the Gold Coast, coming home in second place behind David Reynolds and Dean Canto.

“We have 100 per cent faith in him; we had a bit of bad luck at Bathurst but a good run on the Gold Coast,” Coulthard said.

“He’s fast and reliable and it’s great to have him back with the team this year.”

Team owner Brad Jones said Youlden and Jones were two of the fastest co-drivers on the grid last year.

“Luke has plenty of raw speed and that was highlighted with the podium at the Gold Coast and Andrew’s run at Bathurst was one of the best I’ve seen him do.

“He had a tough run at the Gold Coast but he really is driving as good as he’s ever driven.

“I’m hoping for some really strong results this season.”