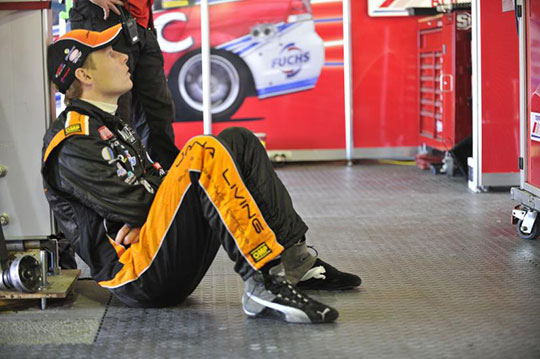 Brad Jones Racing will pay tribute to the late Allan Simonsen in the V8 Supercars endurance rounds later this year.

Simonsen was due to partner David Wall in the #21 Wilson Security Racing entry at Sandown, Bathurst and the Gold Coast, before he was tragically killed in this year’s Le Mans 24 Hour race.

The Danish GT driver and V8 Supercars enduro regular was a friend to all at Brad Jones Racing (BJR) after joining the squad as Jason Bargwanna’s co-driver in the 2011 Gold Coast event, and the team plan to run a tribute similar to that seen on all of its cars in memory of former BJR driver Jason Richards, who passed away from a rare form of cancer in December 2011.

A permanent special star logo bearing ‘JR’ is prominently placed on the B-pillar of each car, between the driver and the rear door (and can also be seen at the top of every page of the V8SCGlobal.com website), and team Co-Owner Brad Jones says the cars will feature a similar tribute to Simonsen in the upcoming endurance events.

“I was incredibly shocked and saddened to hear of Allan’s passing at Le Mans,” said team co-owner, Brad Jones.

“I have known Allan for a number of years and always felt he was an extremely fast, talented driver.

“On behalf of all the employees at BJR I would like to pass on our condolences to Allan’s family. His work ethic, speed and professional attitude marked him as a driver BJR was keen to work with in the future. Moreover he was a great bloke and a gifted racer taken way too early in life. RIP.”

Simonson is survived by his partner Carina and daughter Mie-Mai.