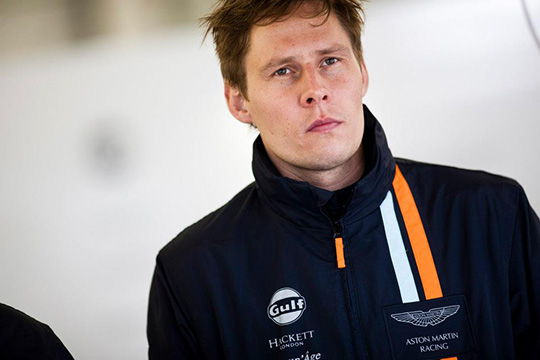 GT driver Allan Simonsen has died following a high-speed crash in the opening laps of the Le Mans 24 Hours.

The Dane had been leading the GTE Am class after starting the race from pole position, when his #95 Aston Martin Racing Vantage left the track at Tertre Rouge on lap three, making heavy contact with the barriers.

Simonsen was attended to at the scene by doctors before being transported to the medical centre where he died of his injuries.

At 15h09 the No.95 Aston Martin Vantage GTE, driven by Allan Simonsen of Denmark, exited the track at high speed at the Tertre Rouge corner on his fourth lap of the race.

The driver was immediately attended on the scene by the doctors from the Automobile Club de l’Ouest’s Medical Service.

In a serious condition, Allan Simonsen was transferred immediately to the Circuit Medical Centre where he died soon after due to his injuries.

Simonsen, regarded as one of the best GT drivers in the world, was a regular in the V8 Supercars enduros over the last decade, and was due to co-drive alongside David Wall in the #21 Brad Jones Racing Wilson Security Holden in the endurance races later this year. A third place finish in the 2011 Bathurst 1000 alongside Greg Murphy, was a particular highlight of the 34-year-old’s career.

Following the ACO’s media statement, in tribute to Simonsen, Aston Martin Racing continued to participate in the 24 Hours of Le Mans at the specific request of his family.

V8SCGlobal extends its deepest condolences to the family and friends of Allan Simonsen.